The charity works through awarding grants, running campaigns and organising its Tree Warden volunteers, and its member organisations include National Trust, English Heritage and Woodland Trust. Marc & Anna’s work was carried out pro bono with The Tree Council paying for production only.

Marc & Anna was brought in to create the campaign for the charity’s Friends of The Tree Council scheme, which aims to increase donations, having initially approached the organisation. It began work on the project about three months ago. 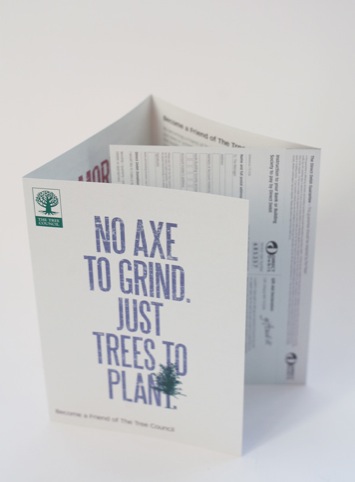 The consultancy created posters and leaflets that use a printed bark texture on the reverse, meaning that when rolled up, the materials resemble a tree. Each poster also features a tree nametag to secure them shut.

Marc Atkinson, Marc & Anna co-founder, says, ‘The brief was quite open. We wanted to avoid any visual clichés so we went for something mainly copy-based, but using small visual references to trees within that copy.’

He adds, ‘We focused on the trees to make sure it appealed to as wide an audience as possible.

According to the consultancy, ‘strong, cheeky, copy’ is used, aiming to highlight the importance of trees, looking to appeal to an audience with an existing passion for the cause. 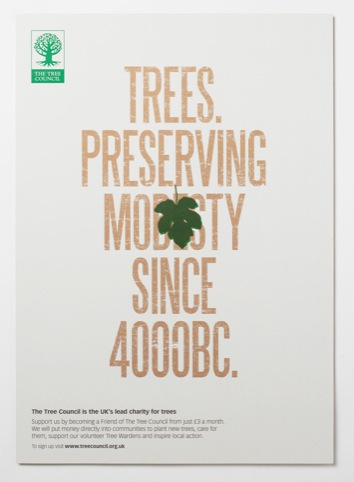 Atkinson says, ‘We used the Cyclus Offset paper as it really has that feel of recycled paper. We used their brand green and took quite muted colours to complement the grey of the paper.

‘Typography-wise we wanted something we felt was strong, so we went for a very condensed font, and gave it a screen-printed feel so it looks less high-gloss and more down-to-earth. The idea was that it was cheeky but friendly, and perhaps a bit unexpected for an organization of that sort.’

The materials will be distributed to the network of more than 8000 Tree Wardens nationwide, the network of volunteers that helps carry out and raise awareness of the organisation’s work.

It is then hoped it will be used across the charity’s online channels and in its members’ magazine.