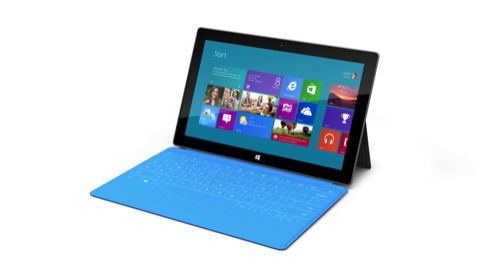 Surface, which was designed and developed in-house at Microsoft, boasts new developments including a casing made using Microsoft’s VaporMg materials process, and a ‘Touch Cover’.

VaporMg, says Microsoft, is a process to mold metal and deposit particles to create a finish ‘akin to a luxury watch’. This VaporMg process has also been used to create a built-in kickstand, that supports the Surface tablet.

The Surface also features the 3mm ‘Touch Cover’. This connects to the Surface with a built-in magnetic connector and acts as a protective cover. The cover also allows users to type and, says Microsoft, uses pressure-sensitive technology to sense keystrokes as gestures, letting the user type faster than with an on-screen keyboard.

Two models of Surface will be available, one using Microsoft’s recently developed Windows 8 operating system and the other using Windows RT.

Microsoft has not yet announced how much the Surface will cost when it launches later this year.