The logo features the phrase Nonnullus Justicia (Latin for Some Justice) and the letters NJ. It can also be inverted to show Neville Lawrence and NL.

Daniel says, ‘This means Neville can use it both professionally, for speaking engagements and other occasions, and for personal letters.’

Daniel created an image relating to the convictions, which adapts a photograph of Stephen, placing Dobson and Norris behind the bars of his jumper. 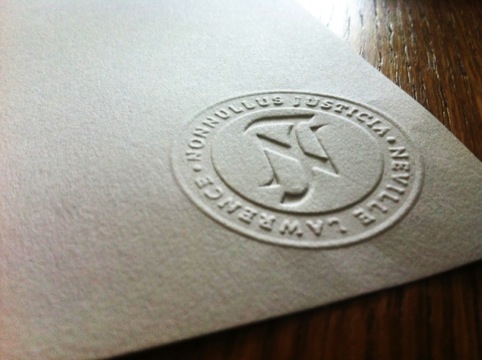 After the image became popular on Facebook, Daniel started working with Neville on several projects, including the creation of the new marque.

Daniel says the Latin name, Nonnullus Justicia, carries legal overtones, while the mark is also designed to look like a legal stamp.

Daniel says, ‘I wanted to create something that fitted in with Neville’s personality, not flashy branding, but something discreet and humble.’