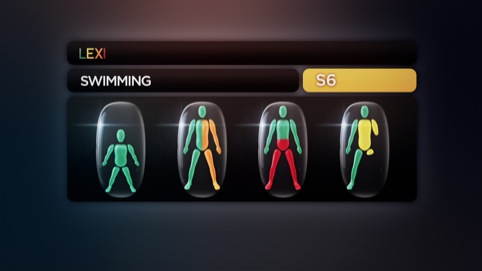 Athletes competing in the Paralympics are separated into groups to compete with others with similar levels of impairments to ensure fair, equal competition. The new system aims to improve viewers’ understating of why athletes with different disabilities compete against each other.

The Lexi system uses simple graphics of a human outline with shading and negative space representing various disabilities. Colour coded graphics illustrate disability types within sporting classes, with the level of impairment shown with green denoting no impairment, through to red, denoting a severe impairment.

Sweet Crude began working on the project in February this year. Fraser Davidson, Sweet Crude co-founder, says, ‘We wanted to show the whole thing on black so that it was more immediately obvious and intuitive. We wanted to get away from the toilet-door sign iconographic, sterile look and make something more human.’

He adds, ‘The main point is for the viewers to see why a particular event is fair – the people all have very different disabilities but have things in common, such as difficulty maintaining body position for the swimming.’

The Lexi system will be used across live coverage of eight sports as an analytical tool before races or games, and during analysis after the events. It will also be used in explanatory videos to introduce the concept and provide viewers with additional information.

Long says, ‘I first started thinking of a graphics system to explain classification in Paralympic sports after the Sydney 2000 Olympics. People wanted to understand but couldn’t in the time available and that was having an impact on their enjoyment of the sport.

‘If you’re trying to explain something that’s very complex quickly, then you probably need a picture. Using figures on screen seemed the logical way to do it.’