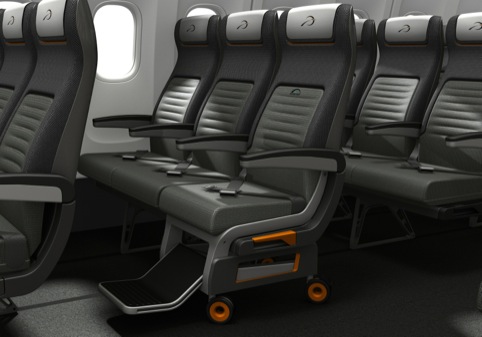 The Air Access Design is based around a detachable wheelchair by which passengers can be transported on and off the plane. This can then attach to a fixed-frame aisle seat to create a regular airline seat.

The design features 360º-pivoting wheels to allow the seat to slide sideways into the frame, and the two elements can be locked together throughout the flight.

Priestman Goode claims that around 20 per cent of the UK’s adult population are currently affected by some form of disability or mobility difficulty.

Priestman Goode founder Paul Priestman says, ‘At present there are some accessibility regulations on aircraft, however they cater only for the most basic requirements. As a result, passengers with special needs often face considerable difficulties when travelling by air.

‘It is a matter of equality that people with reduced mobility should have the same rights to a quality passenger experience that able-bodied people have.’

The designs have also been hailed by Jennifer Howitt Browning, assistant coach of the British women’s Paralympic wheelchair basketball team and a former Paralympian.

She says, ‘I travel by air frequently and at times it has been an ordeal. I applaud any initiative that tries to tackle this problem, and hope that Air Access will stimulate constructive discussions between airports, seat vendors and disability bodies.’