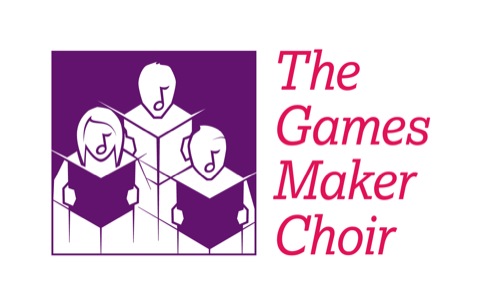 The choir has collaborated with singer songwriter Alistair Griffin in a bid for this year’s Christmas Number One spot.

Spencer Buck, founder and creative director at Taxi Studios, says, ‘The Games Maker Choir was born out of the Olympics so we wanted to create visual synergy between what the choir is doing and what the Games did.’

The logo is deep purple, the dominant colour of the Games Makers’ uniforms, and features three choristers in podium positions with notes instead of mouths. Buck says it was designed to have a ‘vibrant feel’.

Buck says, ‘It was a huge shame considering the Games is done and dusted. We just wanted to continue that good feeling and keep the flame burning.’

Despite this setback, Buck says, ‘We’ve taken it as far as we could and have created a logo that is a continuation of the positive spirit that emerged from London in the summer of 2012.’

The Games Maker Choir’s single, ‘I Wish For You The World,’ will be released on 16 December and all proceeds will go to the British Olympic Foundation and the British Paralympic Association.