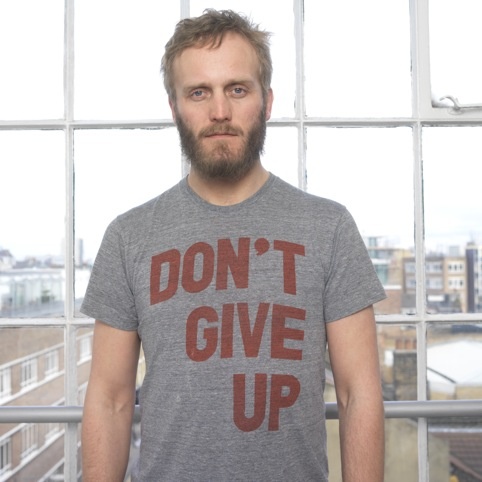 When I completed my fine art degree I was very disillusioned with art and sought something more grounded. I also happened to graduate as a new medium was being born, so thought it could be a great opportunity to indulge my interest in the constant discovery and invention that comes with the new, while corralling and channeling concepts through something you might call ‘design.’

My first job was in 1995 for one of the world’s very first interactive agencies, called CHBi, based in London Bridge (under 8vo for readers who will know them). I was a general designer and creative, the fourth employee that got stuck into anything and everything going. The visual internet was just unfolding, so it was an amazing time to be involved. We worked with interactive TV trials, designed a live link-up video dating game for pubs and created Yell.com in the year I was there. The one after that we set up antirom.

I’m a creative director in the broadest sense of the word. At Poke I’m really concerned with anything and everything that elevates Poke and Poke’s output. That’s a mix of vision, strategy, people and projects. At Hulger, where I’m also creative director, I’m setting strategy for product, brand and communications and directing all design-related activity. At Internet Week and The Lovie Awards I’m helping to shape these platforms to make them rich and credible.

I think the definition has become more blurry. Which is a good thing for me as I’m in the blurriest of the blurry zone. There’s always been a desire for design to be taken more seriously and to deepen its role, and yet it has struggled to dive below the surface. The manifold changes we’ve seen in media over the last decade has forced a reappraisal of design and design’s role in glueing our fractured universe together. But by doing so it has had to stretch and fracture itself to accommodate, new demands, new structures, new forms and new bandwidth.

I have to give you two. The globalrichlist.com and the Plumen 001. Globalrishlist is an old Poke project (2003) that we produced ourselves after several charity clients failed to buy the idea. When it comes to technology it’s so easy for things to become convoluted, so this project became an exemplar of how a sharp idea could be given just enough packaging, just enough context, just enough interaction to land the point, and how paring everything back made it much more potent, not less. The Plumen 001 project was very satisfying because we saw an idea I had in my head one day through to a production model selling to enthusiastic customers all over the world. The old sculptor within me was also very satisfied to be speaking to people through an object again.

We brainstormed a public installation idea a few years ago with Jason Bruges and I got really excited about an idea to create a kind of radiowave bunker in Trafalgar Square. A structure thick enough and involving special materials to deflect all radio waves, radiation, sound and light. A place that doesn’t exist in out modern world so on one level an oasis of calm and yet because of our addiction and constant exposure to all those things, a total freak-out to a lot of visitors. It didn’t progress but I’d still like to do it one day.

I wish I’d had more courage.

I have the same ambition as most artists and designers, which is to create something significant.  It doesn’t have to be a thing. In fact an idea is a lot more powerful than a thing could ever be so I’d be happy with that.

The late Andy Cameron. He taught me you could win by sharing. Seems like a paradox but it isn’t.

Don’t look where everyone else is looking.

Nicolas Roope is co-founder of Poke and Hulger.