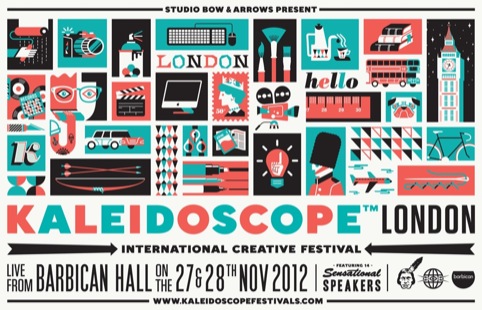 The festival will be held over five days in November, and feature a two-day creative conference in the Barbican, featuring talks, workshops and exhibitions.

And while Kaleidoscope has an obvious appeal to students and working designers, organiser and designer Timba Smits, who is working on the festival with partners Greg Beer and Gordon Shaw, hopes it will also engage with the local community and youngsters interested in creativity.

Smits says he has been planning the Kaleidoscope event for around three years, but that his plans changed completely after he suffered a horrendous knife attack on an east London bus last year, while standing up to youths who were abusing other passengers.

Smits was stabbed three times and left fighting for his life in hospital. Now recovering, he says, ‘The attack really changed my perspective and caused me to rethink my plans for Kaleidoscope. I wanted to emphasise the social aspect of the event and involve the local community.’

Smits has introduced initiatives such as the Cut-It-Out project, which will see 200 local youngsters given free tickets to Kaleidoscope. They will also be able to take part in workshops such as illustration classes and model-making events with Aardman.

And the keynote speakers have been briefed to not only talk about their work and processes, but to also discuss personal experiences, successes and failures.

Smits says, ‘I want the talks to be quite emotional, I’ve been to too many conferences that just feature a run-down of peoples’ work.’

As well as the Barbican conference, there will also be parallel events including the Once Upon A Type exhibition, which will see contributors briefed to represent a line each from a children’s book.