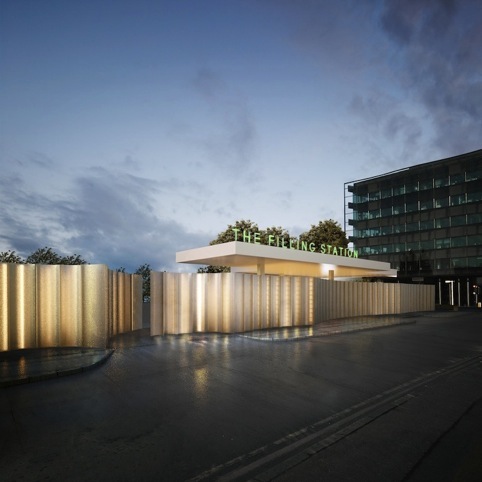 Developed for Office of Change, the consultancy created by Bistrotheque founder Pablo Flack, the King’s Cross Filling Station project will see a disused petrol station on York Way converted into a semi-permanent restaurant and social space.

Carmody Groarke has created a 200m-long and 4m-high curved fibreglass enclosure to separate the filling station from busy York Way. The architect has also defined a large ‘hall’ space under the petrol station canopy.

Meanwhile the existing kiosk is being transformed into a 50-cover restaurant, featuring a kitchen, bar and dining area.

The restaurant at the King’s Cross Filling Station is set to open on 24 May, and the forecourt will open in June.

The Filling Station will be in place for two years before being replaced by housing, which is being built as part of the King’s Cross development.

The World in London