One New Change for Land Securities by The Velvet Principle

The Velvet Principle was appointed to create the wayfinding for a new retail and office development by Jean Nouvel in the shadow of St Paul’s Cathedral, London. The wayfinding design is inspired by the buildings form and the materials used in its finish. It incorporates sleek totems, sign forms made from clear, cast acrylic and illuminated signs within the stone floor.

Norwegian consultancy Haltenbanken was commissioned with landscape architect Cubus to develop the urban space around the shopping street in the town of Vestnes in central Norway. The consultancy developed a special typography and used different types of granite in the project. The designs also had to allow for water drainage and had to be able to withstand heavy traffic. 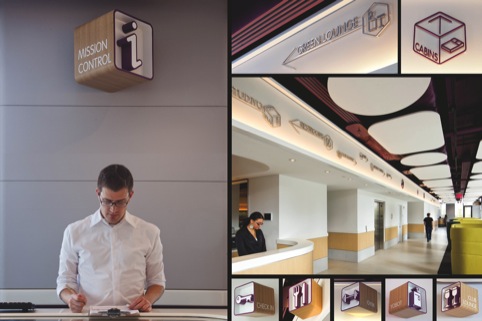 GBH was commissioned to develop the signage for Yotel’s New York outpost, which would be its first city-centre development and its biggest yet. The consultancy developed a system based on a simple box, referencing the pod-style rooms in Yotel. The scheme also uses 3D directional cubes in oak and aluminium and acrylic 2D ‘hexes’.