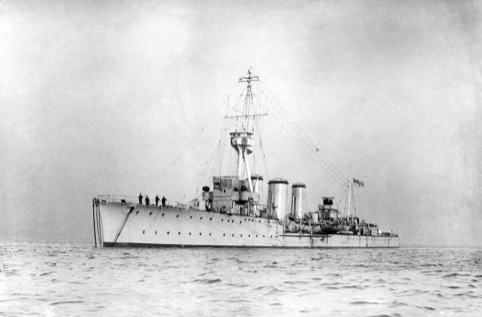 An £845,000 grant has been given by the Heritage Lottery Fund on the strength of design plans by Erich Kadow and Jef Maytom, independent consultants specialising in interpretation design.

The grant is part of a £12.2m Heritage Lottery Fund bid by The National Museum of the Royal Navy, which owns the vessel. The funding balance will be secured with a successful round two bid. If this happens The NMRN will put out a tender for further interpretation design in compliance with Heritage Lottery Fund rules.

A spokesman for The NMRN says that this second stage tender is likely to be put out in the summer. 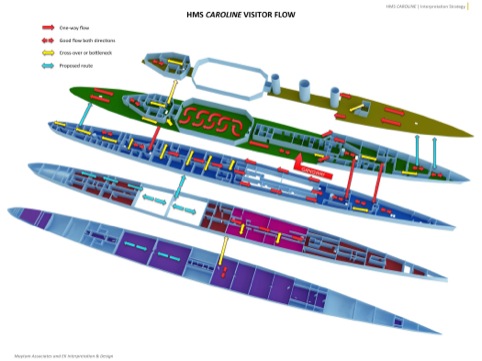 A collection of artifacts originally aboard the ship and currently held by the National Maritime Museum will help furnish the ‘huge and quite evocative spaces’ according to Kadow who says there are some 200 cabins on board.

He says the plan offers a ‘pragmatic solution’ to the presentation of the ship, which was only decommissioned by Royal Navy in 2011 and therefore has upgrades made in the 1970s, 80s and 90s.

The plan offers ‘different experiences and surprises’ Kadow says ‘and will help tell the story of the social history of the ship by bringing its characters to life.’

To view inaccessible parts of the ship Kadow proposes ‘periscopes’ to look into hidden spaces.

Graphic panels will be kept to a minimum with visitors getting most information from ‘hand-held media guides’ or interactive kiosks, which would play video and animations says Kadow.

Built in Merseyside in 1914, HMS Caroline is the last survivor of the Battle of Jutland, the First World War’s longest, most strategically important sea battle and the only time the full German and British navies engaged directly.

Admiral Sir Jonathon Band, Chairman of Trustees of NMRN says, ‘HMS Caroline is quite simply one of the most significant historic fighting ships in the world. To restore the ship and open it to the public as a shared space, museum and cultural hub in Belfast means the city will benefit hugely from its presence as it will attract international interest.’