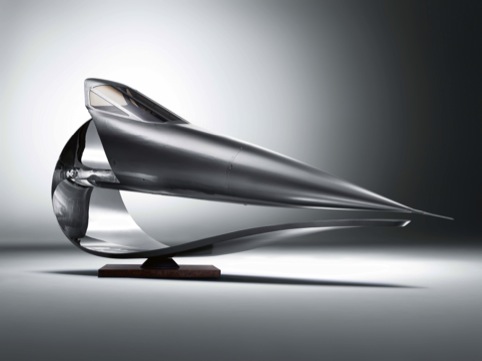 Conran, who had worked on the interior design of the Concorde for British Airways, was contacted by engineering specialists from Rolls-Royce, who had rescued the nose cone.

The resulting art piece is inspired by the sonic waves that the aircraft would have made by surfing the earth’s atmosphere at speeds of more than Mach II.

Over 7m-long, it swivels on an Olympus main bearing and shows the nose tilted, as it would have been on take-off.

Icon is being unveiled next month as the main sculpture at Royal Ascot.

Conran says, ‘This sculpture has represented years of hard work from everyone involved in bringing it to life.

‘The best reward is that we get to display it at such an iconic and historic event and we are honoured Royal Ascot has chosen Icon as their main sculpture this year.

‘It is a great feeling to know thousands of people will soon get to experience and admire this important piece of engineering history.’

Icon will be on public display at Royal Ascot from 18-22 June.

Collect 2013, from the Crafts Council

Wired transport and collaborating with frenemies