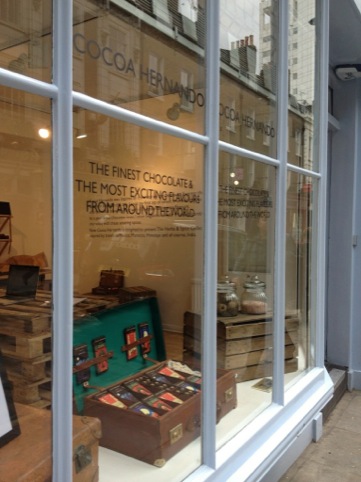 Tomlinson says he was inspired to create the brand while travelling in India.

He says, ‘The idea of Cocoa Hernando developed on an old train in India, where I took my first sip of aromatic masala chai tea.’

The brand has been inspired by the golden age of travel from the first part of the 20th century, according to Tomlinson who says, ‘I love all those Art Nouveau & Art Deco-influenced posters & luggage labels, one of my favourite companies being Richter & Co from Naples.’

The Cocoa Hernando character was inspired by explorer and adventurer Roy Chapman Andrews and Tomlinson worked with designer Graham Erickson to brief illustrator Rui Ricardo on the development of the brand character.

Different flavour varients have been designed to reflect different times of the day, giving the impression that Hernando is forever travelling and discovering.

Cocoa Hernando is available directly online, at pop-up events, and Tomlinson says he is currently in talks with department stores.