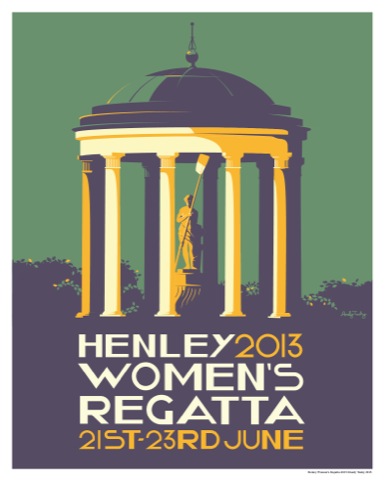 Andy Tuohy Design has created the poster for the Henley Women¹s Regatta, which takes place from 21 to 23 June. Tuohy was commissioned to design a poster based on Henley-on-Thames landmark Temple Island. The design uses a muted colour palette ‘to reflect the vintage style’, according to Tuohy, as well as hand drawn ‘retro typography’. He says, ‘The classical Etruscan-style folly, built in 1771, has been updated to include the existing goddess sculpture bearing an oar to celebrate the unique nature of this foremost UK rowing event.’ 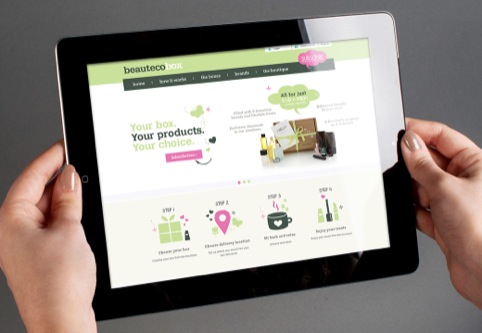 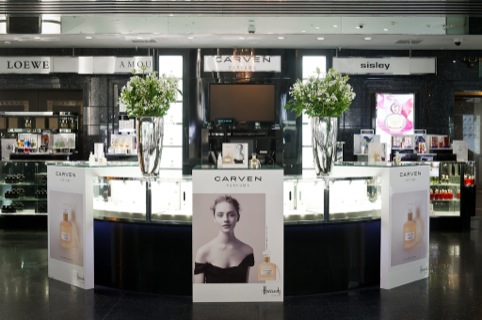 Sheridan&Co has created the retail area and window display in Harrods for the UK launch of Paris couture brand Carven’s new fragrance Carven Le Parfum. The designs aim to create ‘a simple, elegant, feminine’ feel, according to the consultancy, using clear acrylics, displays in white with simple black branding, and fresh white flowers in the window display and on promotional sites ‘to add femininity’, says Sheridan&Co. 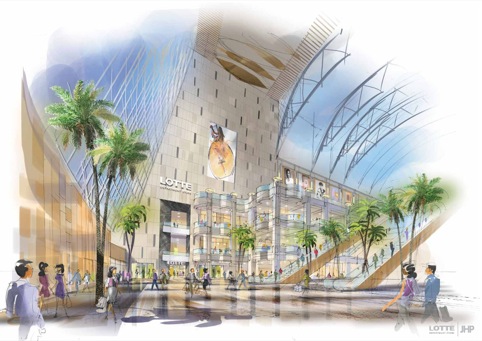 JHP is working on designs for the new Lotte Department Store in Chengdu, China. The store forms part of a 1,393,545 m2 mixed use development, with a cultural centre designed by Zaha Hadid. The store will be set across five floors, covering around 92 900 m2. JHP has been tasked with creating a space that subtly shows the influence of Seoul, South Korea, where Lotte originated. A food hall will be housed in the basement area, with an ice rink on the top floor of the building. Store departments include luxury goods, ladieswear, menswear, and home. The scheduled launch of the store is in September 2013. 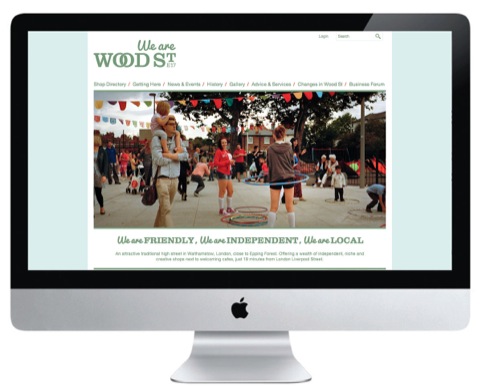 East London-based consultancy Red Leader has created a new identity and website for Wood Street, a street of independent shops and Indoor Market in Walthamstow, London. According to the consultancy, the new brand aims to ‘create a sense of identity to which the local community felt part of, as well as proud of.’ It adds, ‘ The logo and brand had to balance both the values of the long-standing shopkeepers (many of the shops are third or fourth generation run) with the younger and more creative start-ups that have been filling empty units in the Indoor Market.’ The website features a shop directory, practical details and special offers; with each shopkeeper updating their own page. 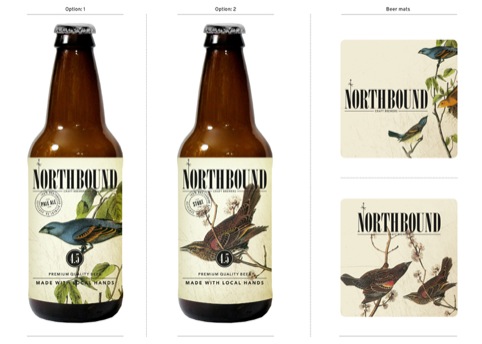 Paperjam Design has created the branding for Northbound Brewery, a new brewery based in Londonderry, Northern Ireland. The designs aim to reflect the brewery founders’ story of locating from Australia to Ireland, featuring small migrating birds to emphasise this theme. 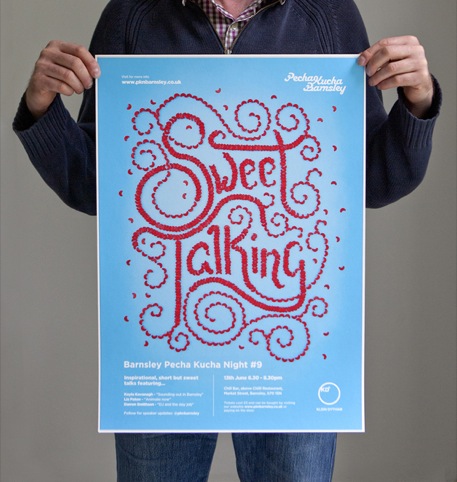 Consultancy DMSQD has created the artwork for a forthcoming Pecha Kucha event in Barnsley, creating typography from sweets to form the event’s ‘Sweet Talking’ title. DMSQD creative director Kyle Wilkinson used hundreds of cherry lips sweets to form the lettering. He says, ‘Pecha Kucha is fun, creative event so we needed to come up something which represented that visually. The six minute 40 second talks are quite literally short but sweet and our Sweet Talking artwork captures that perfectly’.

Glasgow-based product design company 4c Design Limited has been appointed to design the Commonwealth Games Queen’s Baton that will visit all 71 competing Commonwealth Nations and Territories ahead of the Glasgow 2014 Commonwealth Games. Weighing no more than 2kg, the baton must be robust enough to withstand all weathers and various transport modes in order to be in constant working order for the 10-month period of the relay.  The baton will be unveiled later this summer and begins its journey on 9 October at Buckingham Palace. 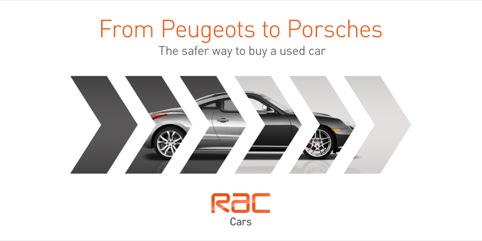 Venturethree has designed the branding for RAC Cars’, a new enterprise that sells used cars. The  RAC Cars identity project follows Venturethree’s repositioning of the RAC, aiming to show that the organisation is the ‘Motorist’s Champion and to drive the awareness that RAC is about much more than breakdown’, according to the consultancy.

Saffron Brand Consultants has launched a new website and film, created in collaboration with artist and architect Luis Urculo. According to Saffron, the film is inspired by chairman Wally Olins, who also provides the voiceover. 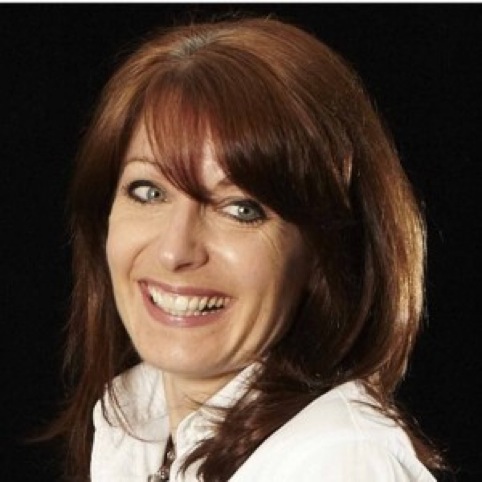 Interior designer Pernille Stafford has launched Surrey-based consultancy Resonate Interior Architecture. The consultancy has so far been appointed to work with clients including Senator, projects for Harris Broadcasting and PA Resources oil and gas company in Hammersmith. Stafford founded Canvas Creative in 1997, merging it into Scott Brownrigg in 2006. 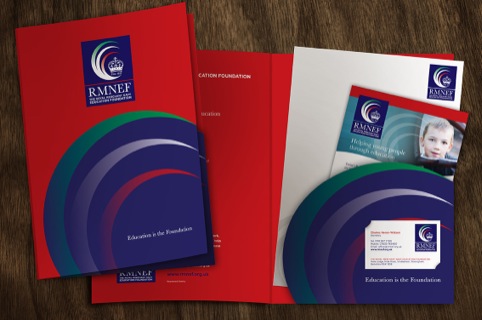 Sheffield Hallam University is hosting a 24-hour Design Challenge in July. The event will see participants collaboratively designing with people who live with Cystic Fibrosis and Motor Neurone Disease. The event is facilitated by Julia Cassim, visiting senior research fellow of the Helen Hamlyn Centre for Design at the Royal College of Art, who developed this 24hr user-centred format. For more information, visit www.design4health.org.uk.

Studio Baum has created a new website design for international publishing house Pushkin Press, as well as working on the publisher’s childrens’ site. The consultancy worked alongside Elmysterioso on the project.

Ribena has launched a competition for the public to redesign the brand’s bottle label to celebrate its 75th birthday this year. The winning family’s design will be used on bottles sold in Tesco and the family will also receive a holiday, with 20 runners-up receiving a year’s supply of Ribena squash. Winning designs will be selected by a judging panel led by ex-Blue Peter presenter Katy Hill. According to Ribena, ‘from paint to pastels, crayons to collage ­ anything goes to help create a new look for this classic. ‘The competition closes on 21 June 2013. For more details visit http://www.ribena.co.uk/75-birthday-competition

Consultancy Clock has redesigned the website for local Dundee newspaper the Evening Telegraph. The new website will feature a Dundee Life section, which ‘aims to capture the happier side’ of living in the area, according to publisher DC Thomson. The new website is adaptable for PC, mobile and tablet, and will be managed on an on-going basis by DC Thomson¹s in-house editorial and digital teams.

Northumberland-based Beach Design has created the branding and website for Round Table Solutions strategic communications company. The consultancy previously worked with the company founder John McCabe on his corporate identity and website. Beach Design says it was briefed to produce a ‘modern and unfussy’, yet ‘strong, corporate’ look. 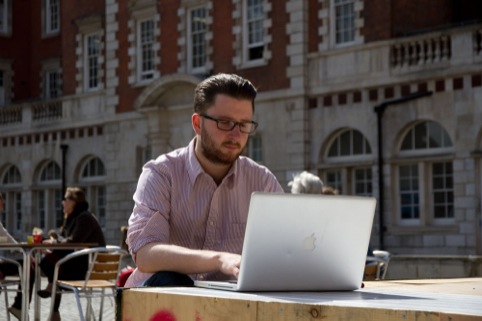 Second-year Chelsea College of Arts Design student Jack Hardiker has won the Chelsea Scholarship Challenge, which tasked students with producing an idea that changed or enhanced the supermarket experience. His ‘saving space’ concept aims to tackle the issue of waste by reducing the price of produce as it approaches its sell-by date. Hardiker receives £5000 of the £10,000 scholarship fund split between the winning three of the 14 participating students.

Italian interior and bathroom brand Devon&Devon is launching its first UK flagship store in Westbourne Grove, west London. The design of the store was developed by Paola Ciarmatori Tanini, who co-founded the brand with Gianni Tanini in 1989 in Florence. The designs reflect ‘the spirit and the history of the brand’, according to Devon&Devon.

Consultancy Smack has created the iMember.co.uk website, which aims to help UK consumers maximise group subscriptions by reminding them of the benefits they’re entitled to as members of clubs, societies, gyms, banks, and professional bodies. Users can either search by group or by offer, for instance searching for discounted tickets to Alton Towers. Smack is now working on the iMember app build, to alert people as to when they are in the vicinity of a particular offer.

Blue Marlin has launched a new logo and website to celebrate its 20th birthday. The new branding is focused around the word ‘braver’, aiming to reflect what the consultancy calls its ‘creative work that pushes boundaries and propels clients’ businesses forward.’ The new, flexible identity features a new mark and a monochrome colour palette.