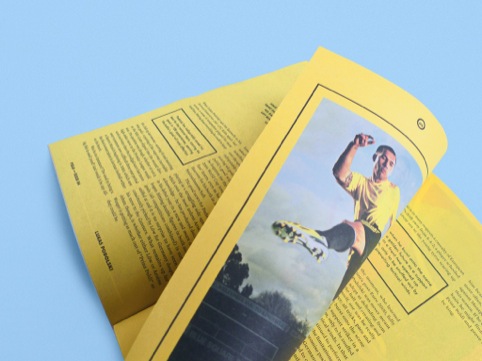 The consultancy has already designed the Spiel magazine and website which charters the liminal space occupied by lovers of ‘football, football and fashion, football and music, football and art’.

Now Well Made turns its attention to Field, which is pitched as a match-day read for Premier League fans and has a circulation of 50 000.

The magazine has been launched by the Spiel team, and designed by Well Made, which remains on board for weekly art-direction.

Well Made’s Matt Saint says, ‘We’ve tried to reference football as much as we could but kept the design quite minimal. We’ve tried to roll that out through the rest of the magazine.’

The front cover features ‘a nice Colophon typeface within a goal’ says Saint who has incorporated pitch detailing like a white D at the bottom of the page and a contents page laid out as a team sheet.

Illustrations have been commissioned for each issue, some through Well Made’s Young Pines intern programme.

Although Field has just launched it will pause over the summer break and resume when the Premiership recommences in August.

Pentagram partner Paula Scher on working from ‘an opposition to something’

Are we not men? We are Devobots!

A new look for the city of Minsk