Big Eyes has been named as a reference to the agency’s visually-led approach to advertising, according to SomeOne co-founder Simon Manchipp. 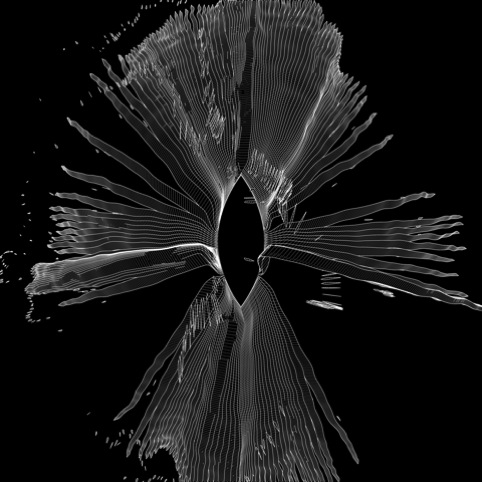 Martin Galton, Creative Director of BigEyes says, ‘We want to make visually exciting work, but also honest representations of the brands we are helping communicate. We want to make work you can “look in the eye.”

Someone turned to Field and asked it to create ‘something innovative and daring using eyes as a metaphor,’ says Field co-founder Vera-Maria Glahn. Field developed a ‘metaphorical representation of the iris in a 3D environment.’

Glahn says the generative system considers variables including ‘how many fibres to use, regularity vs irregularity, the shape of the pupil – some are round and human, some are more cat-like, or like a monster eye.’

Frames of the programme have been isolated to make freezes, which can be used as icons.

The data which feeds the programme is randomised, giving an infinite number of iris designs.

Manchipp says that ‘sculptures’ created by Field ‘when viewed from the front are designed to resemble the complex series of fine muscles that expand and contract to make up the iris of a biological eye.’

The Big Eyes brand will be rolled out across digital, print and interiors touchpoints and there will also be a vinyl record, which is being compiled at the moment.

Manchipp says, ‘We’re looking to produce an album of visually-led music — soundtracks from some of the greatest visually memorable films of our time. Lawrence of Arabia, StarWars, Pulp Fiction, Easy Rider…’

A new look for the city of Minsk