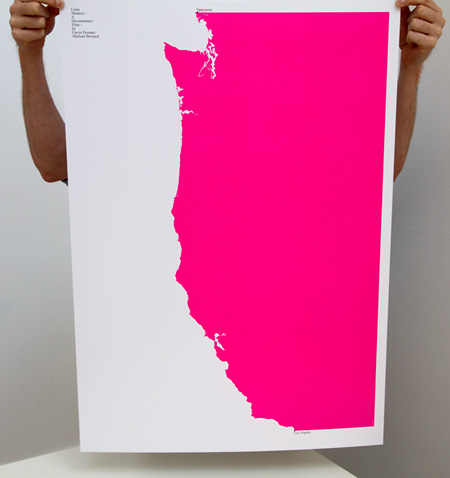 The directors turned to Build and asked the consultancy to create a limited-edition poster to help get some momentum behind their documentary.

To mark the UK DVD launch of the film, Build is creating a series of further prints, which will be exhibited at the launch in response to a Coast Modern brief.

There will be five one-off prints (which are still being designed) cast in the same form as Build’s recent Word Power series.

In addition, this design is being screen printed as a run of 100:

The film itself sees Froome and Bernard journey along the Pacific North West coastline from LA to Vancouver showcasing the ‘the pioneers of West Coast Modernist Architecture’ and the homes they have designed.

The homes are known for their innate environmental context as architect Dion Neutra suggests when he says they have, ‘the comfort of being inside, yet you have the feeling of being outside’.

Three generations of these houses are explored showing the viewer the common principals of a sense of place, light, and a profound connection to the environment in Coast Modern homes.