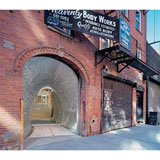 Future Systems is an interesting practice for two reasons. First, it is not afraid of style, its style being essentially Futurama. Second, it used to be an ideas practice, but these days (when allowed) it also builds. Which means pragmatism has to meet idealism head-on. And principals Jan Kaplicky and Amanda Levete make a pretty good go of it.

The practice and the author of the book, Design Museum director Deyan Sudjic, go back a long way. In 1983, Sudjic commissioned a flat from Kaplicky – it is featured in the book. In 1989, Levete joined the practice and it was at this point that things really started to get built. When Future Systems won the Stirling Prize in 1999 for its NatWest 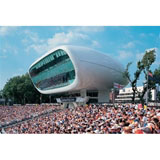 media centre at Lord’s Cricket Ground, it had finally arrived. Sudjic observes that Kaplicky and Levete are ‘not professional icon builders’. And indeed, it is perhaps odd that they have not built more since their famous Selfridges in Birmingham. Perhaps they are just slightly too visionary, or too outsiderish, for their own good.

Like their American equivalents, Diller Scofidio and Renfro, they need a good, solid public commission to move on to the next stage. Just imagine how much better today’s rash of blob-buildings would be if more of them were by Future Systems.

Future Systems by Deyan Sudjic will be published by Phaidon Press on 20 November, priced £45