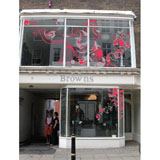 ‘Tis the season for the high street to drown in elves, reindeer and synthetic snow. To buck the trend, fashion boutique Browns has enlisted six illustrators to put their own spin on storefront festivities, says Dominic Lutyens

It’s a depressing aspect of Christmas that every year shops, hotels and restaurants wheel out the same, sorry clichés – scarlet poinsettias, Santas, snowflakes…

The project could well have bitten the dust: the illustrators – Natasha Law, Daisy de Villeneuve, Steve Wilson, David Downton, Jacqueline Bissett and Molly Molloy – were all on the books of hip agency Pearce Stoner, which went into liquidation earlier this month. The project was initiated by its sister business, Fashionart.com (whose fate, at time of going to press, was uncertain), in collaboration with Browns. Yet Browns remains committed to the venture.

The idea is to emphasise the long-established association between fashion and illustration. ‘These illustrators’ close relationship with fashion makes this the perfect collaboration,’ says Browns managing director Niki Scordi. (De Villeneuve’s illustrations have decorated shoeboxes for Topshop, while Law illustrated Jemma Kidd’s make-up range and windows for Ravel.) Appropriately, the illustrations will dovetail with mannequins and clothes, while limited-edition, signed prints will be for sale inside the stores. 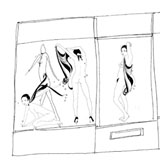 Uber-hip though these illustrators are, they have not banished all references to Christmas – although their nods to it are imaginatively abstract, not tediously literal. Molloy, who has taken inspiration from Joseph von Sternberg’s moody movie The Blue Angel, will create a window dominated by crimson (think Chanel’s Rouge Noir lipstick, not tacky poinsettia red), silver, black and white. Her suspender belt-sporting version of the cabaret artiste Lola – originally played by gravel-voiced Marlene Dietrich – will perch on a stool, right leg akimbo. Christmas will be equated with hedonism and narcissism by Law, too – in her peepshow-like window, scantily clad Aubrey Beardsley-inspired female figures cavort like Isadora Duncan.

One reason for this recurring imagery is that the windows have the overall theme of ‘femme fatale’, which slightly spoils things – although an improvement on snowmen, it’s still corny. In the case of Wilson, though, hedonism is evoked obliquely. He will decorate the South Molton Street men’s store window with androgynous men’s faces, around which swoosh leonine locks – an effect reminiscent of trendy men’s hair salons circa 1975. He rightly describes his style as ‘psychedelic’. Indeed, in typical surreal style, one arabesque of hair morphs into a horse. Christmas is evoked subtly through a wine glass lying on its side, out of which spills a red tendril of hair (hinting, again, at hedonism and decadence via a simple use of colour).

‘The image, in cut, adhesive vinyl, is in red and pewter with a slight sparkle, to make the window look Christmassy,’ says Wilson.

Many windows fuse this retro vibe – also found in Downton’s windows, featuring early 1960s glamour pusses in a loose style reminiscent of that era’s fashion illustrations – with theatricality. Perhaps it’s a given that, even in avant-garde circles, Christmas can never be treated in a futuristic fashion, which would explain why some of these windows are inspired by old-fashioned peepshows, cinemas or theatre sets and never simulate computer or TV screens.

Theatricality is enhanced in the case of de Villeneuve’s windows (for South Molton Street’s Browns Focus) by their stylised artificiality. Her signature style is, in any case, super-artificial in its faux-naif use of children’s felt-tip pens. She is creating a Christmassy, if cartoony, feel with mannequins presented beside cut-out cardboard presents and a fireplace.

‘I’ll also paint some real furniture white, and draw around the edges in a black felt-tip to give the objects a graphic outline,’ she explains. ‘So the furniture will be 3D, but will also look flat like my drawings.’

Apart from working to a larger scale than usual, these illustrators face the challenge of working in 3D. Law has had experience of this (‘I made sets for my mother’s travelling theatre group,’ she says). Others admit it won’t be easy. ‘My installation will need to work from all sides,’ admits Molloy. ‘It’ll need to look good inside the shop, too. You won’t want to see hideous strings or backs of cardboard cut-outs.’ 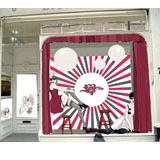 You can, however, expect to see an unorthodox vision of Christmas – louche, camp or simply evoked by colour, notably the deep red of mulled wine-stained lips. And under absolutely no circumstances will you chance upon a red-breasted robin.

The window displays are in place from 21 November to 6 January 2007 and can be viewed on-line at www.brownsfashion.com