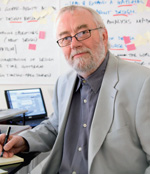 Bill Moggridge has been named as the winner of the 2010 Prince Philip Designers Prize.

British-born Moggridge (pictured) is director of the Cooper-Hewitt National Design Museum in New York and was a co-founder of consultancy Ideo. He worked on the design of the Grid Compass, one of the first-ever laptop computers, and is also credited with developing the field of interaction design.

The Prince Philip Designers Prize, which is in its 51st year, is awarded in recognition of an outstanding contribution to UK business and society through design.
Three special commendations were also awarded this year, to Neville Brody, Dame Vivienne Westwood and furniture designer John Makepeace.

Moggridge was announced as the winner of the prize at a ceremony last night at the Design Council’s London headquarters.

He says, ’I couldn’t believe it when I found out I was nominated and saw myself on a list with all the other nominees – I was really surprised.’ He adds, ’I’m a citizen of the UK and a resident alien in the US – it’s very lovely [to be recognised by the UK design industry].’

David Kester, chief executive of the Design Council, says, ’The Prince Philip Designers Prize provides a timely reminder that we are a nation of innovative, sometimes maverick thinkers -that’s why the UK continues to be at the forefront of global design. Celebrating those talents is a vital part of inspiring our next generation of world-changing designers, innovators and creatives.’

The judging panel for the prize was led by Prince Philip and the shortlist was selected from nominations from Arts Council England, the British Fashion Council, the Chartered Society of Designers, the Design Business Association, D&AD, the Design Museum, the Institute of Engineering, the Royal College of Art, the Royal Institute of British Architects and the Royal Society of Arts.