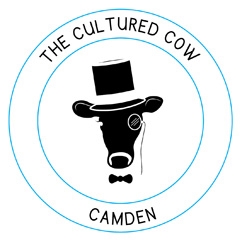 It is understood that ACM Ventures, which owns and manages Cultured Cow, has not yet appointed a consultancy to design the store’s interiors, however the company was unavailable for comment at the time of going to press.

Connor Goddard created the name, brand identity and packaging for Cultured Cow, as well as the marketing and advertising. This included designing all the collateral, point-of-sale information and the website design.

The consultancy was appointed in mid-September following a four-way credentials pitch.

Chris Goddard, director of Connor Goddard, says it was given a ‘very simple’ brief, and wanted to create ‘something a bit different’.

The logo, which features a ‘metrosexual’ black-and-white cow wearing a monocle and top hat, was chosen to portray ‘integrity, wit and intelligence’, says Goddard.

He adds, ‘Unlike other brands, their product is fresh. They wanted something a bit more sophisticated to appeal to the 30-something “yummy mummy” set and tap into the professional market.’

It is hoped the store will open in late January 2011.