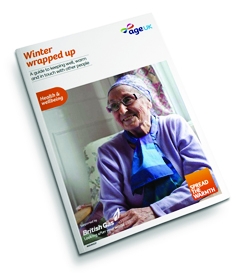 The project has been worked on by Forster Agency, a dedicated service provided by Forster to meet the needs and aspirations of older people, which was set up in the summer.

Forster Agency was appointed following a credentials- and creative-led pitch and was briefed to create a campaign that would raise awareness of unnecessary deaths due to the winter.

The consultancy worked with Age UK to understand the issues faced by older people in the UK during the winter, which can be seen as a ‘pyramid of suffering’ starting with social isolation, and moving up to malnutrition and then death, says Forster Agency director Pippa Strutt.

She adds, ‘We realised that winter wasn’t the problem, it was the lack of warmth – both human and physical.’

Forster Agency worked with Age UK’s in-house design team to create the ‘Spread the Warmth’ logo, which will be seen across the campaign. The consultancy also collaborated with the in-house team to create the website, which goes live today, and print communications and another digital element, which roll out over the coming weeks.

Strutt says, ‘We knew that a campaign that integrated the in-house team and had everyone in the charity behind it would have far more impact.’