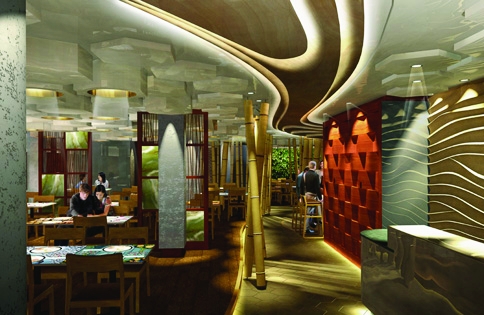 The consultancy approached the restaurant speculatively in November 2009 and pitched a proposal, which was accepted for the company’s second restaurant, Inamo St James.

While the design of the first restaurant worked ‘in tandem’ with the technology in a ‘clean, crisp environment’, Macaulay Sinclair co-founder John Macaulay says his design will better integrate technology and express ‘nature and movement’.

A cellular structure, which Macaulay describes as ‘an inverted Giant’s Causeway’, protrudes from the ceiling, housing table projectors. The ‘hexagonal extrusions’ are part of a ‘carpet of elements’ and ‘complete a grid’ which aligns tables with projectors.

Rock strata and sedimentary rock formation have inspired wall features and a meandering ceiling pattern follows a path on the floor, mapping a circulation route.

Semi-precious stone and a Japanese garden with water feature and bamboo have also been integrated into the layout.

A devil’s advocate in the big group debate