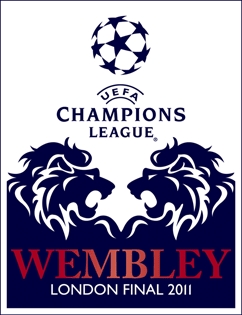 The visual identity will be used ahead of the final, which takes place on 28 May 2011.

The ‘Lions of London’ logo draws inspiration from modern British designers such as Vivienne Westwood and the Savile Row tailors, as well as referencing the historic lions found on statues, ironwork and paintings in London.

In addition, the two lions represent the two teams competing for the Champions League title.