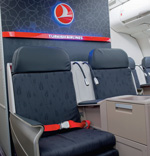 Priestman Goode has delivered the first elements in its rebrand project for Turkish Airlines.

The consultancy was appointed last year to redesign interiors across the airline’s entire fleet, as well as its lounge and check-in areas, as part of a contract worth a six-figure sum (DW 3 September 2009).

The consultancy has now delivered the new interior designs for the airline’s wide-body Boeing 777 and A330 aircraft, which are set to go into service.

Luke Hawes, director at Priestman Goode, says a key part of the work was to develop the application of the Turkish Airlines logo. A Turkish graphics group has worked on the new identity, with Priestman Goode acting as a consultant.

Hawes says, ’The primary brand message is the logo with the red stripe below on a black background (pictured).’ This will be applied across airline interiors and ground services, with a back-illuminated 3D domed logo badge used on galleys and on the back wall of each cabin.

A tulip pattern is used on the business-class seats (pictured right) and is laser-cut into curtains.Hawes says, ’The tulip is a Turkish national icon and we’ve put a contemporary spin on it.’

Priestman Goode has created interiors for the new comfort class, which is a premium class that will be used on the 777 aircraft. The comfort class uses green, brown and grey colours, with brown textile seats with green stitching.

Hawes says Priestman Goode is currently working on designs for the ground services, which will be finalised in the next three-to-four months and used initially in
on designs for the airline’s narrow-body aircraft.

Turkish Airlines currently has a fleet of 147 aircraft, with 105 on order

The airline is planning to double its number of weekly flights by 2015, with a focus on long-haul routes to North and South America