‘Artist refers to a person, wilfully enmeshed in a dilemma of categories, who performs as if none of them existed.’ So said pioneering performance artist Allan Kaprow.

It’s this idea of performance that’s the name of the game at the Hayward’s ’Move: Choreographing You’ exhibition, which opened last month.

Kaprow was a pivotal figure in the creation of the ‘Happenings’ that emerged in the 1950s and 1960s, pioneering the concepts of performance art. In his time, he was responsible for more than 200 of such ‘Happenings’, which he described as ‘events that, put simply, happen’.

Matthew Butcher, director of Post Works, says, ‘It’s an interesting piece of work in discussions across a lot of disciplines, exploring the relationships between performance and art and architecture.  It really bridges the gaps between these things and presents that in a complete work.’

Eighteen Happenings in Six Parts originally saw an audience moving together to experience elements such as a band playing toy instruments, a woman squeezing an orange and painters painting.

Post Works’ take on the event is based on Kaprow’s original designs, with the installation taking the form of a 12-metre long wooden and rope structure. Kaprow’s original happening was staged in a gallery, divided into four rooms by a wooden structure.

Butcher explains, ‘We tried to use a structure of the same size.  Kaprow’s was based on an exploding Cubist space – we’ve followed that but

twisted the actual dimensions and fragmented them to update it for today, by making it more intense.’

Part of the guidelines set out by the Kaprow estate state that the work, despite being designed to be reinterpreted by other artists, must be destroyed after the performance.

So, Post Works’ creation will be obediently banished to a skip following the weekend’s shows.

The structure will house a 45-minute performance consisting of four dances choreographed by Butcher’s mother, Rosemary, and responding to improvised actions, events and props created by artist Edwin Burdis. 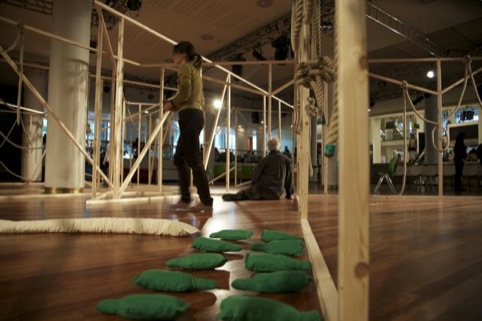 Butcher adds, ‘Each time it’s performed will be slightly different – it’s being choreographed as the piece evolves.’