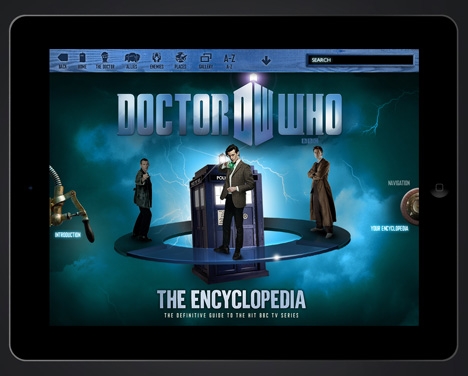 The consultancy has developed the app with BBC Books – which has published the print version of the encyclopedia – and content is written by Dr Who script editor Gary Russell.

Brandwidth has been working on the project for around a year, according to executive creative director Dean Johnson.

He says, ‘Our greatest challenge with this iconic BBC brand was to create an app that didn’t break character for a second. The print version of the encyclopedia is written as though this whole world actually exists.’

The encyclopedia provides information on all Dr Who episodes broadcast since the series’ return to screens in 2005. Brandwidth says it covers everything ‘from Captain Avery to the Zygons’ and has more than 3000 entries.

Users are also able to preview and buy episodes through a direct link to iTunes and there are also special interactive portals for major Dr Who characters including the Doctor himself.

The consultancy says the Doctor’s portal uses parallax technology, which allows users to move their iPad to scroll through a 3D environment.

Albert DePetrillo, senior publicity director at BBC Books, says, ‘The Dr Who Encyclopedia offers a complete immersive digital reading experience, offering fans a stunning variety of navigational possibilities as they explore the world of the Doctor.’

The app is available through the Apple store from today.