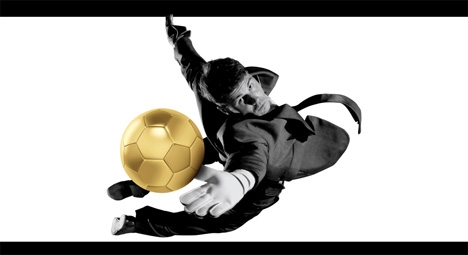 The consultancy replaces previous brand guardian Navyblue, which went into liquidation in September.

Designwerk was appointed to the role last month following a credentials pitch.

As brand guardian, it will be responsible for the look and feel of all materials for the next three years, including marketing collateral, events and conference wayfinding, signage and graphics, and the Soccerex website.

Designwerk has initially completed a photo-shoot for the new Soccerex brand elements (pictured), which will be used for the Soccerex Global Convention – a five day conference, exhibition and two-day football festival in Rio de Janeiro, Brazil, which runs on 26-30 November.

Christian Cook, creative director of Designwerk, says, ‘Soccerex has been well established over the last ten years, so certain guidelines and principles are tried, tested and true.

‘Our primary role is to endure those are managed and upheld and policed properly, but we’re also tasked with expanding and enhancing the whole brand to ensure that all the different deliverables are put into annual brand guidelines and graphics are updated. We’re rejuvenating the photography and event look and feel.’

Following Rio, the next Soccerex event, the Soccerex European Forum will take place in Manchester, from 28-29 March 2012.