When Nativity scenes start popping up on streets around the country it’s a sure sign that the run-up to Christmas has truly begun. 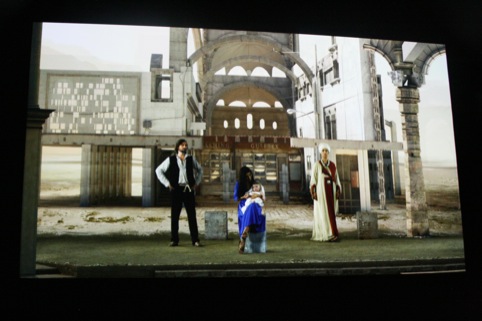 In what could be a world first, artist Martha Fiennes (sister of the acclaimed actors Ralph and Joseph) has created a completely self-generating, moving, digital Nativity scene, which has been installed in Covent Garden, London.

Working with visual effects company MPC, live actors and a high-tech film set, Fiennes’ company SLOimage has created a tableau of Mary, Joseph and Jesus, the wise men, angels and onlookers within a ‘digital painting’.

The work has been coded to ‘evolve’ in a completely random manner, so while it constantly tells the story of the Nativity, it will never tell it in the same way twice. Day could fall into night, a character might move around the scene or it might start to snow. The changes are unknown not just to the viewers but also to the creators themselves.

Fiennes says, [The piece] incorporates incredible expertise from maths and high-end bespoke software coding through to the principles of Renaissance painting and esoteric inspiration.’

Music for the pieces is by composer Magnus Fiennes, another of Martha’s brothers.

Martha Fiennes’ Nativity is at Covent Garden Piazza until 5 January.