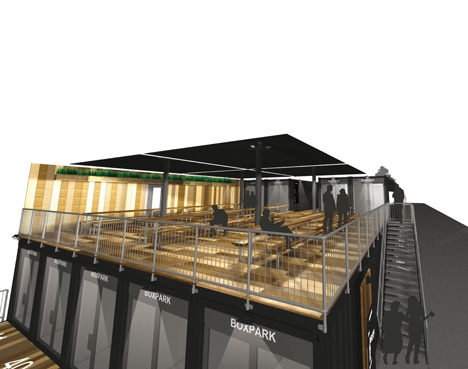 Boxpark is the brainchild of Roger Wade, chief executive of brand consultancy Brands Incorporated and former owner of fashion brand Boxfresh, which will make its return to the high-street at Boxpark in a space designed by HL Studio.

Boxpark was originally intended to open in August, though a spokeswoman says that the opening date was pushed back to 28 November due to the build taking ‘longer than anticipated’, and the decision to open in time for Christmas.

It will be in place for approximately the next five years, after which the site has been earmarked for major development starting around 2016. Anthony Thistleton, founding director of Waugh Thistleton Architects, which designed the space, says that it’s likely the site will then be used for a ‘high-density office block’ with about 20 floors.

About 60 individual brands will each take over a unit within the development, and this concept of a semi-permanent pop-up space means that while some brands will use the units as traditional retail spaces, other will use their area more as a ’marketing tool’ and physical presence to raise the brand profile.

While many of the spaces will be used by established brands such as Puma, there will also be independent brands making their high-street debut, such as east London-based fashion brand Abuze, which currently only retails online.

Anthony Thistleton, founding director of Waugh Thistleton architects, says, ‘Both from a practical point of view and from our point of view it’s about the containers being self-contained units with certain technical constraints – but part of the idea is that they’re reasonably flexible and people can move them around after.’

He adds, ‘Some of our earlier concepts were a bit off-the-wall, but in the end it was very specific and rigid in its functionality. [The units] work in a very purist form so we kept going back to a much more straightforward layout and fit out.’

The Boxpark branding was designed by consultancy Studio Makgill, which was approached by Wade for the project in October 2010.

Hamish Makgill, Studio Makgill owner and creative director, says, ‘We spent a lot of time with [Wade] going through the plans. We came to the black and white colour palette very quickly.

‘[Boxpark] is not ashamed of being what it is: the units are hard things, so you celebrate that rather than trying to camouflage it. It’s very much a practical solution but there’s something attractive to that.’

The unusual ‘pop-up mall’ concept and space constraints (each unit measures only about 12m by 2.5m, with a height of just over 2.5m), has led to designers creating innovative retails concepts, such as the HL Studio-designed Boxfresh space. The unit will see footwear displayed along one wall, apparel on the other, and an area for ‘connectivity and interaction’, potentially with screens, in the middle of the space.

Design and marketing consultancy The Tailor of Shoreditch has designed the Wagamama unit, having created pop-up restaurants for festivals for the brand this summer. Consultancy founder Ian Irving says, ‘There are a lot of restrictions with the materials as they want the exteriors to all look the same.

‘There’s wooden decking seating so we tallied up the interiors to the existing assets, using lots of woods, polished concrete and stainless steel, but still with the white, red and black of the Wagamama brand guidelines.’

Irving says the consultancy had also created concepts for Boxpark for online fashion retailer Asos and for Yo Sushi!, though concepts have been left with Boxpark. However, an Asos spokeswoman tells Design Week that while the brand may have been approached for the space, it declined the offer.

The Wilson Brothers was appointed by Puma to create its Boxpark unit, having previously worked with the brand on in-store concepts. ‘For the container the brief was very open but we had to work though a lot of different potential concept schemes and work through the tangibility of it’, says Ben Wilson, Wilson Brothers co-founder.

‘There are a lot of constraints, like size and light, so it’s trying to create something that’ll fit within the brand but also perform practically as a retail environment.’

Sharing the aesthetics of Studio Makgill’s branding and the other interiors of the space, this industrial, rough and ready feel seems to be a common trope in designing for the space. Wilson says the Puma concept look and feel is ‘utilitarian and functional’, using a lot of natural wood and prominent joinery techniques.

Combining this fairly tried-and-tested look-and-feel with a an unusual take on high-street shopping, it will be interesting to see how the brand mix and idea of autonomous units in an outwardly homogenous space fares over the next five years in an area as notoriously fashion-fickle as Shoreditch.

However, as Thistleton points out, the nature of the containers themselves mean that regeneration and change of use will be easy following their tenure on the site.

Thistleton says, ‘The units are recycled already – when [Boxpark] is destroyed, they can go back and have another two, three or even four uses – they could be retail units or become shipping containers again, ferrying iPads back from China.’