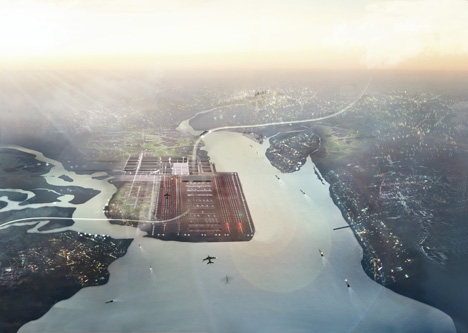 Foster + Partners itself has made lofty suggestions of the project having Brunel-like potential,  and is effectively calling on designers and government to gather an industrious Victorian spirit.

Lord Foster says, ‘If we are to establish a modern transport and energy infrastructure in Britain for this century and beyond, we need to recapture the foresight and political courage of our 19th-century forebears and draw on our traditions of engineering, design and landscape.’

He continues, ‘If we don’t, then we are denying future generations to come. We are rolling over and saying we are no longer competitive – and this is a competitive world. So I do not believe we have a choice.’

The Foster proposals, which have been developed with transport consultancy Halcrow, feature a four-runway airport attached by land to the Thames estuary and capable of handling 150 million passengers per year.

Interestingly, in the light of debates surrounding polluting aviation projects, this one will harness tidal power to generate carbon-free energy by proposing a barrier crossing protecting London and the Thames from flooding into the 22nd century.

Boldly, the practice also promises an environmental strategy minimising the impact of development, creating wildlife habitats to offset losses and to be the ‘catalyst to reduce pressure on foreshore habitats from rising sea levels and storm activity’.

The plan also takes a holistic approach to transport links, and through what it calls a ‘logitics matrix’ trade connections between the Thames Estuary and all other major ports will be forged by rail.

Similarly it is hoped passengers can use a ‘utility and data spine’ reaching out across the UK from high-speed rail networks.

This door-to-door way of thinking is a design philosophy held by product and transport system designers Priestman Goode, which earlier this year presented proposals for the Moving Platforms integrated transport system.

Priestman Goode director Luke Hawes says, ‘In our work we’re concerned with seamless journeys from home to destination – the effective movement of large numbers of passengers, based around existing networks, making transfer connections trough the city.’ 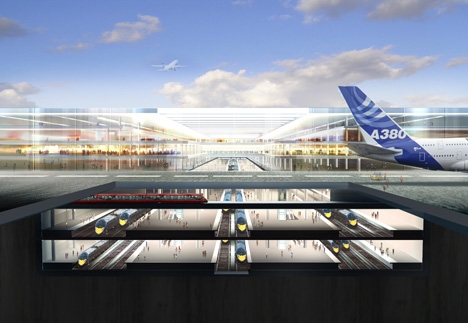 Designing for passenger experience, Hawes would look at the transfer of passengers from hotel to airport and temporary accommodation for those needing a three- five-hour stop over.

He says, ‘At [Foster’s] new airport this might be looking at the needs of passengers making a quick hop between financial districts.’

We should remember that the Foster plans are a proposal at this stage – albeit a reasonably detailed 38 page proposition, but there is excitement in the industry that a call to arms may have been initiated by its ambitious aims.

Mat Hunter, chief design officer at the Design Council, says ‘This is a great chance to start with a blank page and adopt a design-centred approach to a major piece of infrastructure. In many ways the UK is like any other “client” – there’s a need to be inspired, to “take the plunge” and consider the more disruptive, and not just the evolutionary, and to recognise the value of investing in good design at the start.

‘The fact that Lord Foster, as a globally-renowned, sustainability-aware designer is initiating this project is hugely positive – what’s needed now is to bring together those on all sides to explore how such an exciting project could work financially, environmentally, logistically and politically. Design’s great power is to evolve and improve ideas, not just accept or reject them.’

And it sounds like the London Mayor might already be onside. Boris Johnson is reported to have given cautious acceptance saying, ‘I am delighted that distinguished figure like Lord Foster agrees that the answer to Britain’s aviation needs lies in the estuary.’

The Mayor’s own plans for an estuary airport were met with concerns over safety and environmental impact although Transport Secretary Justine Greening is reported to have said that Johnson’s plan is still being considered.

Greening says, ‘There are a number of different proposals that we have to look at. I have no doubt that [Johnson] will raise it with me.’