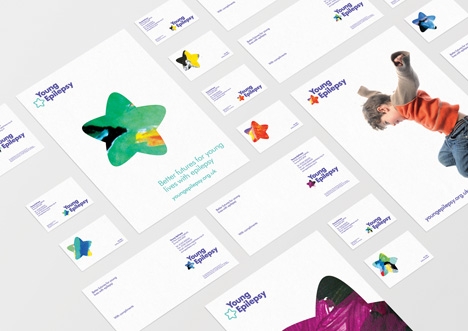 The new identity draws on artworks created by students at schools operated by the charity.

Appointed following a four-way credentials pitch last year, the Leeds-based consultancy began work on research exercise which led to the name change and the development of a new identity.

The organisation runs the St Piers School and FE College, both of which help school children with severe epilepsy. Artworks created by the children were used in the branding.

Nick Ramshaw, managing director of Thompson Brand Partners, says ‘small edits’ were made to crop work from larger pieces and place them inside a star marque. Ramshaw says this application ‘makes the children who have epilepsy and related conditions, the stars’.

Different artworks will be used as backdrops to provide flexibility, while a blank version of the star logo can also be used.

Its new look is rolling out across signage, web templates, banners and newsletters, led by new guidelines. A corporate brochure design is currently being finalised, which will be delivered in two weeks and signage is going up around Young Epilepsy buildings.

The changes to the brand follow the charity’s shift from a health and education provider in Surrey to national charity three years ago.