Williams Murray Hamm and sister group Branded have worked on the identity for care home operator HC-One, which has taken over the running of more than 200 care homes formerly run by collapsed group Southern Cross.

Southern Cross, which operated more than 750 homes, was forced to shut down earlier this year after landlords running the homes said they wanted to leave the group, which had been suffering financial difficulties.

HC-One, which launched earlier this month, was set up by Southern Cross’s former landlord NHP and health and social care experts Court Cavendish, who wanted to ensure continuity of residential care and job security for staff. The group operates 241 care homes across the UK.

Branded, which is part of the Loewy Group, owned by Writtle Holdings, was appointed directly earlier this year to work on the strategy and positioning for HC-One, which stands for Health Care One.

Fellow Loewy Group consultancy WMH was then brought in to develop the visual identity. 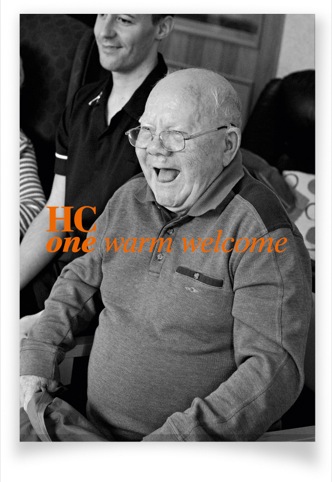 WMH says it worked to create a ‘simple, clean’ identity, using orange on a grey background, to work with black and white photography of staff and residents.

Each shot is accompanied by a line such as ‘HC one of a kind’ or ‘HC one gentle touch’.

Staff are given the option of branded T-shirts with wording such as ‘HC one big heart’ and residents are offered a memory box, ‘HC one to remember’, to store personal memories.

The consultancy says it wanted to communicate that staff were in the residents’ home, rather residents in the staff’s home, to place a clear distance between new operators HC-One and the negative reputation of Southern Cross.

WMH creative director Garrick Hamm says, ‘Throughout this exercise we were determined to keep costs low to ensure that the real investment was put directly back into the people, training and provision of enhancing care for the residents.’

The branding is rolling out on touchpoints including bespoke wayfinding for each of the homes.