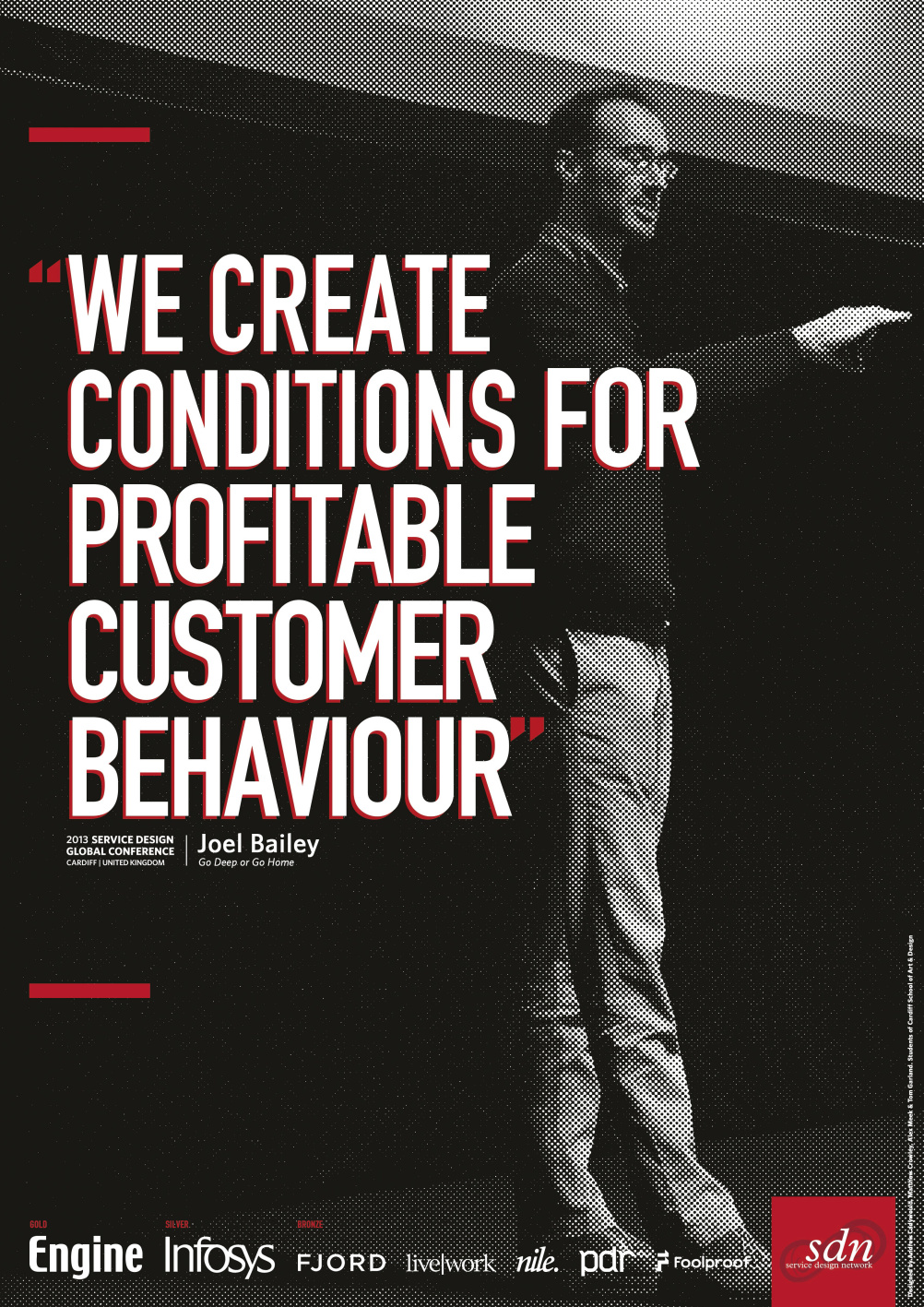 But through service design, a quiet revolution may be at work; more businesses are beginning to invite designers in who can guarantee return on investment, and some companies are embedding designers into their organisations, in some cases even at board level.

Before we get carried away, the notion of service design isn’t new, but it seems that there’s a growing acceptance that designing product service systems and the business systems that enable them is a good thing if customers are happy and, frankly, if money is being made.

Business management firm Capita, although technically an agency, sits somewhere between in-house and consultancy, in that it’s brought in by companies to reshape entire services on contracts that might last for between five or ten years.

From within it has reshaped the recruitment process for The British Army, and the UK TV licensing process for example, and in each case has gone to the client offering what Capita director of service design Joel Bailey calls ‘guaranteed transformational savings’.

Bailey says that service design is at a tipping point and to deliver real transformational change it needs to go further than it ever has before, further into the fabric of the business – ‘Go Deep or Go Home’ as he puts it in his talk.

He speaks about getting further down into organisations ‘and getting your hands dirty’ but for Bailey this is a cuckoo-like sentiment – he means for instance wear a suit; ‘It’s a small thing but it’s a signifier, wearing the same clothes as the people you’re trying to convert.’

This chimes with the idea of designers operating at board level in companies, and suit-wearing might be a necessary side effect of taking such positions, (but not for everyone I’m sure.)

‘Our clients are very profit focused’ says Bailey, who feels his job is to ‘bring down cost as well as increase happiness of customers and revenue.’ He adds, ‘I create the conditions for profitable customers.’

This means ‘making services work’ by reducing points of failure and therefore increasing value and ‘going deeper into operational change’ turning the customer experience into profit and focusing on the ‘real client pain points.’

In a sentiment echoing the thoughts of British Airways creative director Richard Stevens, Bailey says ‘A reactive approach to change is the enemy of what I do.’

He also points to an old adage among CEOs that ‘gambling, divorce and innovation’ are the best ways to lose money  – but maybe they’ll have to come up with a new saying now.

The conference also presented some good examples of how companies can change from within to embrace service design. 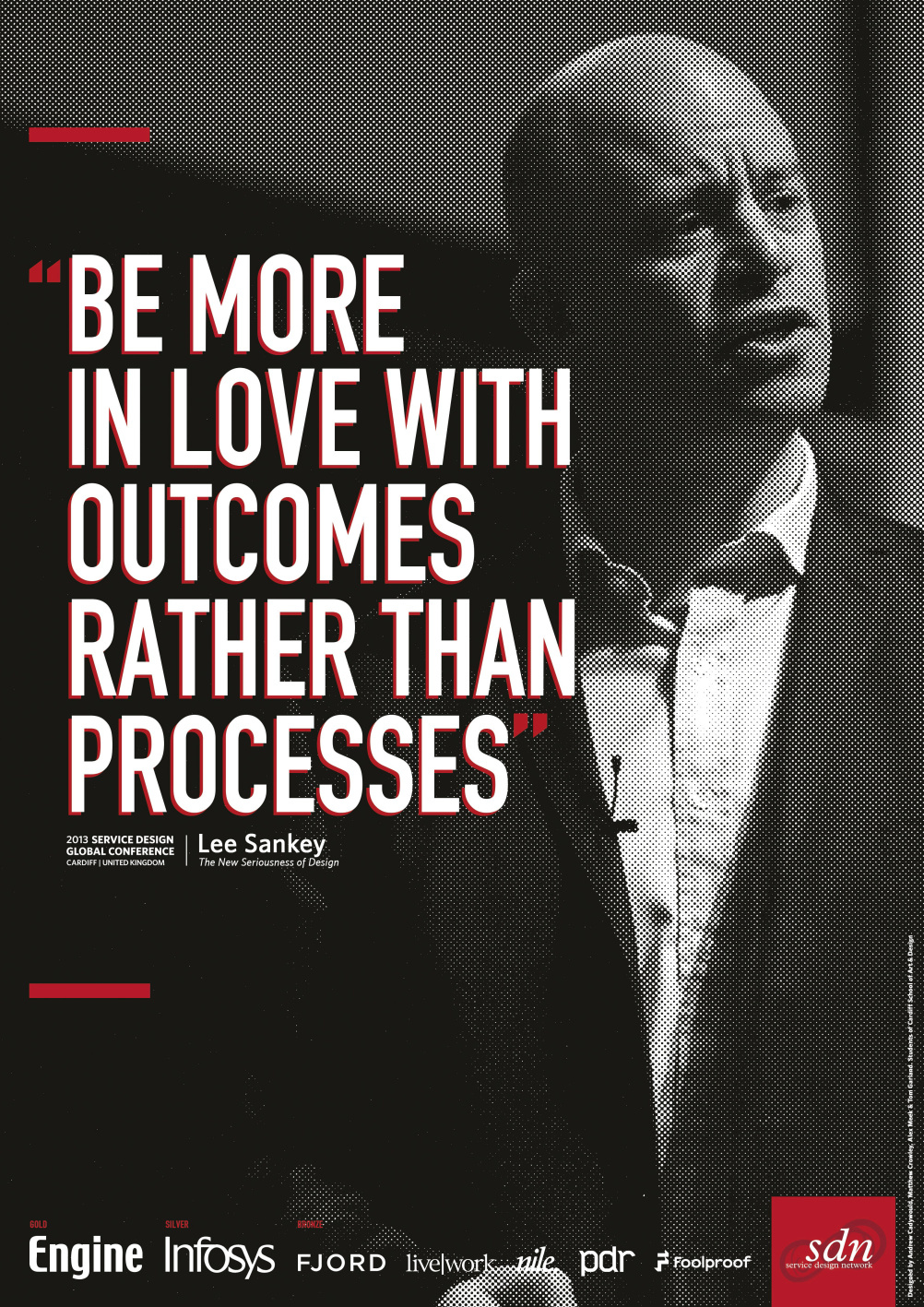 Lee Sankey, Barclays design director of innovation and experience, spoke with great optimism about ‘the new seriousness of design’ and how it is increasingly recognised as part of the literacy of business and is becoming part of the boardroom.

This means design itself changing says Sankey ‘and becoming a core business competency.’

In the same breath he suggets that for these companies ‘It’s too important to procure design, we need design to be fundamental to the way we operate business.’

It’s perhaps a litmus test for this sentiment that at the micro end of the spectrum many design consultances are running and launching companies based around their own products.

He talks of ‘rising complexities’ within companies where ‘value is distributed and not so much concentrated in one thing.’ Barclays, he offers, is ‘no longer just a branch and cheque book’ for customers.

Sankey lays down a perhaps uncomfortable challenge to the service design industry – ‘Is service design more in love with the process than the outcomes. Do we want to be defined by processes, or outcomes and impact?’

It’s the right time to step up though, he says, with designers driving the conversation, and even businesses coming to designers to say, ‘what do we do?’ rather than ‘here’s a brief.’

While traditional design roles and responsibilities are being blurred, principles are changing too. ‘The devil is no longer in the detail, it’s in disruption,’ says Sankey.

It doesn’t really roll off the tongue, but by way of example he says that  the future of banking probably won’t be decided by UI design.

Sanky says, ‘There’s a huge movement for simplicity, reduction and flatness at the moment, but do we really want, bland, flat, forgettable experiences? Or do people want personality and difference? As a designer what are you adding? Be more than the glue, be the integrator and the facilitator.’

Sankey uses the example of the Barclays Pingit project, a payment mobile app that allows users to make and receive payments using their phone’s contact book. Crucially, as the designers are so close to the project it has been iterated ten times since its introduction in February 2012. ‘We turned the brand intent into reality,’ says Sankey. 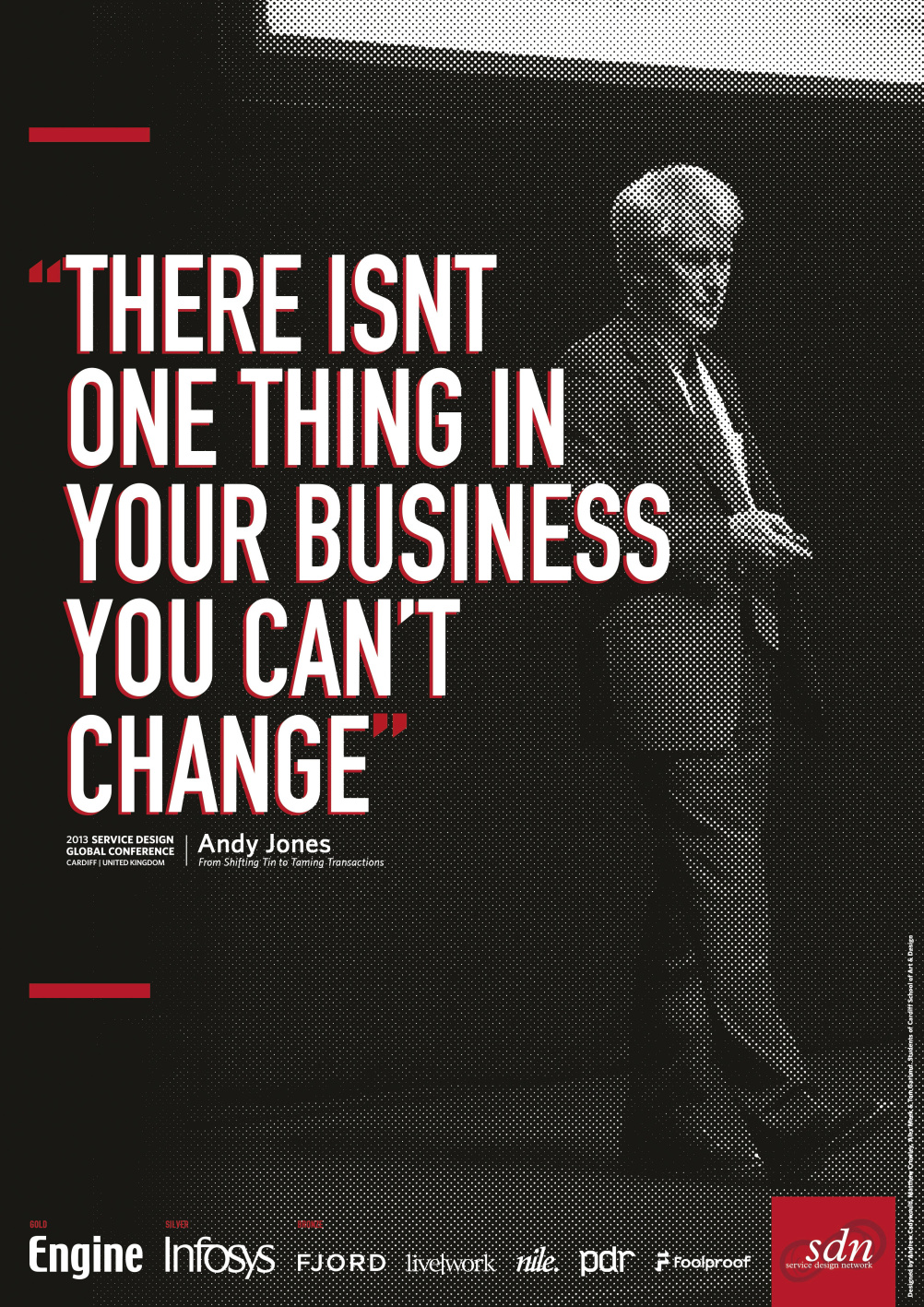 The story of Xerox’s transformation, meanwhile, was shared by Andy Jones, director and global manager at Xerox Global Services, who led a change from within.

Traditionally a tech manufacturer, Xerox came up against hard times and ‘was close to bankrupcy’ before Jones led a project to change the company into a services business.

This means offering holistic facilities management for companies, helping them create efficient paperless offices, and round the clock cover for both the services and office equipment, which Xerox still markets.

‘As an organisation everything has to change and there’s a massive impact on customers who suddenly become clients,’ says Jones.

He describes this revolution diplomatically as ‘a struggle’ and you can imagine him telling the board that they would be selling less of their various paper machines into paper-less offices, and sounding at best a little counter-intuitive.

‘It meant taking 56,000 devices from one customer and giving them back 22,000,’ says Jones whose faith was rewarded when the UK Government placed a £750m contract – ‘which is a bit different to selling them 5000 copiers.’

Jones says the company can ‘reduce the cost of print ownership’  has the infrastructure to provide 24/7 assistance, even covering other companies products and also does transportation systems, human resources outsourcing, finance and accounting systems. It’s now working on selling analytics engines into hospitals.

From the other side of the fence IDEO and Engine were showing how a service-led way of thiking is routed into their consultancy offer. 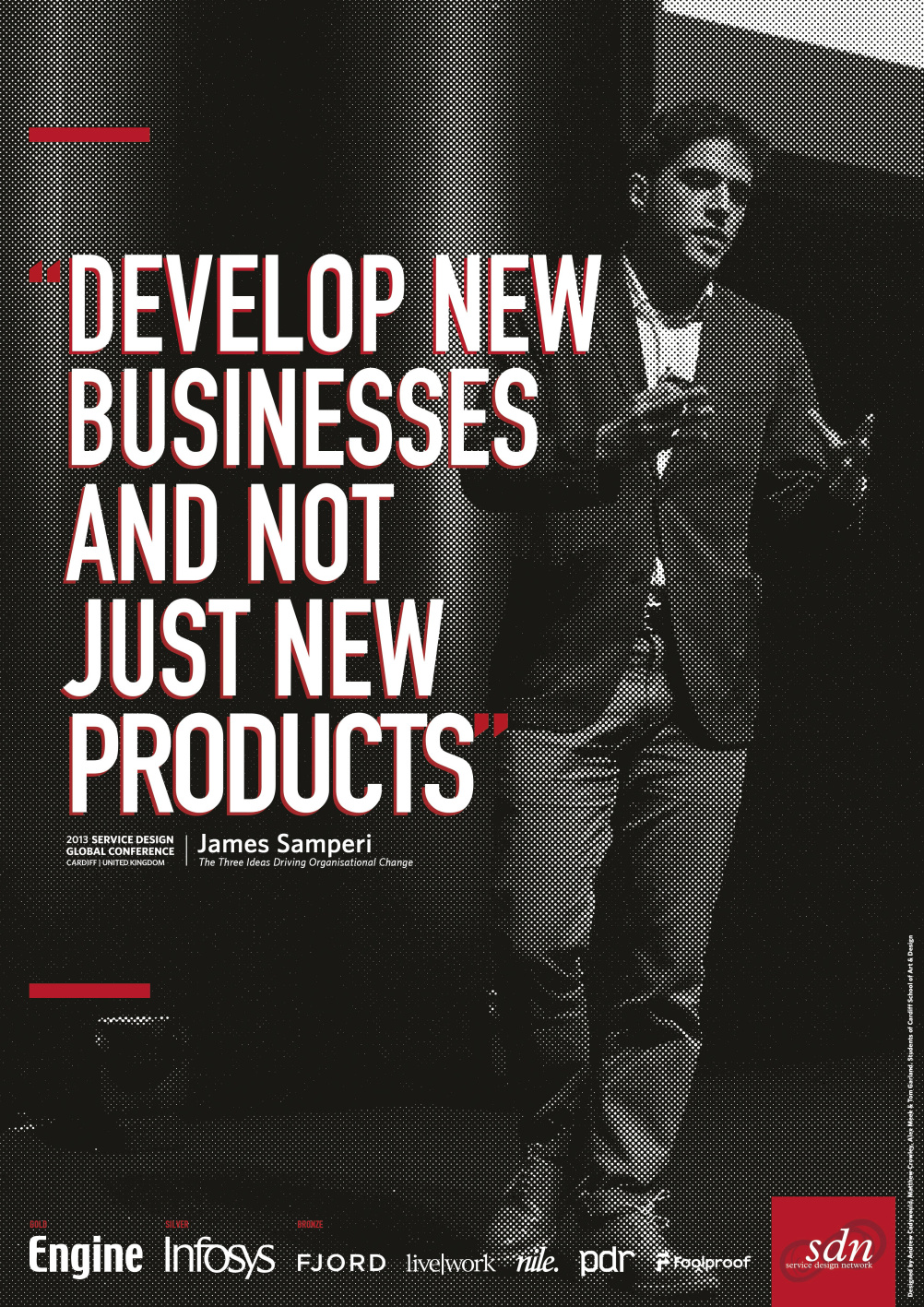 Engine director James Samperi says that the ripples of service design have spread beyond the design sector because it presents business leaders looking to change their organisation with a neat set of ideas.

He says three major transformations are under-way: the shift from business to customer-centricity; from product to services development; and a change in mindset from solely analytical to imaginative approaches to improvement and innovation.

IDEO, which champions what it calls ‘a human-centred design approach’ to helping organsiations innovate and grow is a consultancy incorporating the principles of service design, without really calling it that. 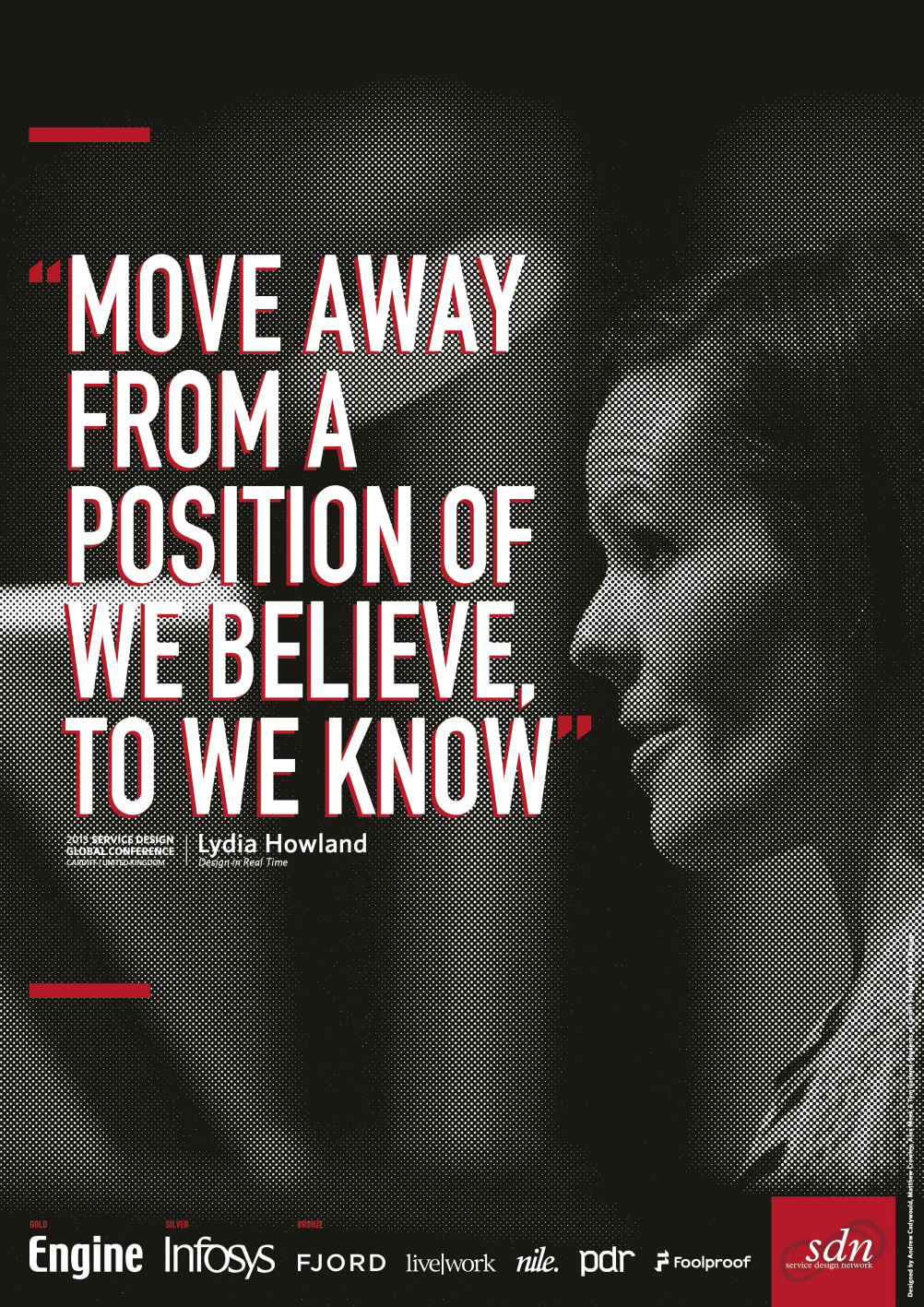 Lydia Howland, portfolio designer and human factors designer at IDEO left us with plenty to think about in her Design in Real Time talk.

In a business age increasingly dominated by Kickstarter, pop-up shops and start-ups that live in beta she asks how service designers might  develop ‘launch-to-learn’ live prototypes.

Of course service design is proud of its painstaking research-based methadologies – its quantitive and qualitive balance – but Howland proposes that people respond to reseacrh that they know is research in a self-conscious way.

‘There’s no substitute for an actual experience’ she counters, and offers that with ‘service design research and a start-up mentality’ you can guage ‘actual reactions in real life contexts.’

Ideo.org has been working with Unilever, Water and Sanitation for the Urban Poor, and the Global Alliance for Improved Nutrition to design a scalable business in Kenya selling water alongside hygiene and nutrition products.

A design team spent two weeks in Nairobi, and interviewed consumers, entrepreneurs and government agencies before prototyping a ‘Smart Life’ brand sold from two kiosks, one travelling cart and one delivery service.

A beta company was up and running in two weeks, and 520 litres of clean water was sold, but the company was effectively ‘fake’ and ‘even the staff in the kiosks had scripts.’ This gave real feedback on the most effective methods.

Now a real Smart Life social enterprise has been set up in the knowledge that clean water is always the driver, people trust and value brands, the more touchpoints there are the more trust there is, people are willing to pay in advance, the woman is the champion of health in the household, and its best to deliver at weekends.

It’s obviously completely unrealistic to think that all designers across the industry will be able to justify return on investment by adopting the service design model. The profitability of some types of design remains frustratingly intangible, at least at the beginnings of a project, even though we all know its real value.

But these service design case studies and principles give an interesting insight into what makes a client listen – promises of effectiveness, efficiency, happy customers and profitability.   You can’t argue with that.