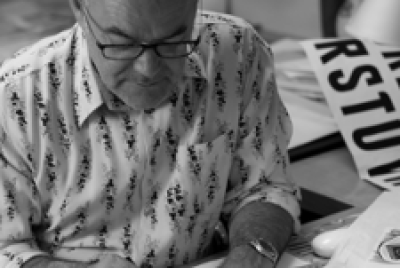 Living in Norwich I was lucky enough to know the local motoring correspondent for the Eastern Daily Press newspaper, Peter Dunn. Apart from having three attractive daughters, (one of which was at art college) I needed little encouragement to visit his house every Friday evening to view and be driven in the new car he had to test drive that particular week. I subsequently drove my first Ferrari at the age of 16 on a disused Norfolk airfield and got to meet Colin Chapman whilst “testing” a Lotus Elite who encouraged me to become a car designer as cars were my (second) passion then.

My first job after leaving the Royal College of Art was at an audio-visual company for a couple of months before I took up the role of junior designer at Minale Tattersfield, which was my dream job.

The best job in the world. I could think of no better occupation whereby clients pay you to be creative and enjoy yourself enormously in the process.

Most certainly the inexorable march of the Apple Mac and its constantly changing software. However, I still can’t use one other than for e mails and am a firm believer in the power of the pencil! Ultimately I’ve yet to see a computer have a creative and innovative idea. I am very fortunate in that I’m perhaps the last of a dying breed who value the craft of mark-making over technology, and would most certainly not be employable as a graduate if I came knocking on our studio door today.

Difficult to answer as I’ve gained so much enjoyment out of so many projects over the 30 years, however the Howies wardrobe point-of-sale project was one of the most creatively fulfilling. From an original idea the whole thing snowballed way beyond our original expectations into working with a very talented group of illustrators and artists culminating in a one night exhibition and countless column inches of PR in the national press.

I think the Olympics identity for London 2012 may have been a poisoned chalice to any designer taking it on with such a strong legacy of memorable identities over the years. Then again, I would have loved the opportunity to have created something simple, timeless and relevant in a similar way to what we achieved with the Formula 1 World Championship logo we designed back in 1994, which is still looking good today in my opinion.

No great one in particular but rather many daily ones that, if you’re pushing the creative boundaries, you constantly learn from.

To remain completely happy and satisfied with what I do on a daily basis, taking each day as it comes and enjoying it to the best of my abilities.

Without a doubt Marcello Minale, a positively larger-than-life personality and an inspirational and good-humoured person to have as your first boss. The convivial, relaxed, creatively stimulating atmosphere that we enjoy in our studio here at Carter Wong is in no small past due to the same vibe I picked up and took with me when leaving Minale Tattersfield after three enjoyable years there.

What piece of advice would you give to people starting out indesign?

Remain as enthusiastic and confident as you possibly can, even when attending your umpteenth interview because who doesn’t want to be surrounded by positive and optimistic people?

Signs to encourage more women to work in design

The Eureka moments behind famous designs