‘Vanity Fair is a very vain, wicked, foolish place, full of all sorts of humbugs and falsenesses and pretensions’, says the narrator of William Makepeace Thackeray’s 1848 novel Vanity Fair. 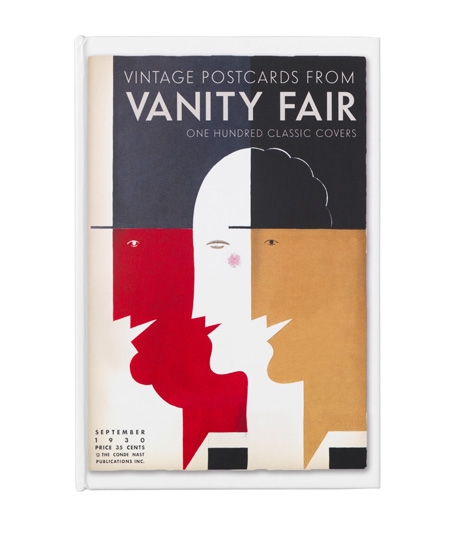 Humbugs, falseness and pretension aside, Vanity Fair magazine’s covers have always been stunning – and now, they have been brought together in a lovely collection of postcards.

Vintage Postcards from Vanity Fair comprises 100 cards, each displaying a different Vanity Fair cover from the 1920s and 1930s by designers such as Paolo Garretto, William Cotton and Eduardo Garcia Benito.

The images have been selected by Vanity Fair’s editor Graydon Carter (whose character has been immortalised in the book How to Lose Friends and Alienate people), who has been at the publication since 1992.

The magazine started life almost 100 ago in 1913, founded by Condé Montrose Nast (yes, that Condé Nast), before falling victim to the Great Depression in 1936. It was revived in 1983, and has since courted controversy – notably from the much-aped shot of a naked, pregnant Demi Moore.

But before the likes of Madonna were gracing the cover, the magazine’s first incarnation saw it discovering or supporting art world and literary superstars such as EE Cummings, PG Wodehouse, Noel Coward, Gertrude Stein and Man Ray; and often reproduced the works of luminaries such as Matisse and Picasso for the pleasure of its ‘smart set’ audience.

Museums Sheffield goes under the sea at Millennium Gallery