Tucked away in a secluded beach idyll lurks a terrifying world of corpses, rapid aging, sexual deviance and death. 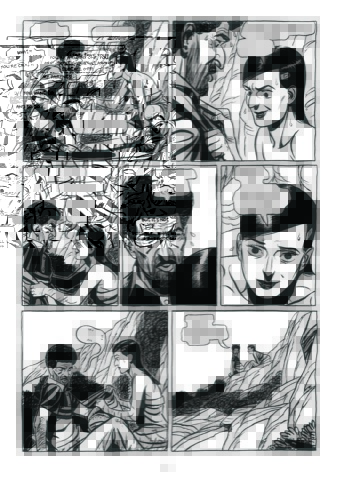 At least, in Sandcastle it does. This deeply creepy, disquieting graphic novel, written by Pierre Oscar-Levy and with artwork from Frederik Peeters, is the forthcoming release form Self Made Hero, the latest we’ve read in their series of beguiling, if terrifying graphic novels.

The book tells the story of 13 (yes, unlucky for some) holidaymakers who descend on their tranquil – or so they think – patch of unspoilt coastline.

Things take a turn for the worse, however, when one of the young children discover the body a young woman floating the in sea. The motif of her heart-patterned hair scarf becomes a poignant emblem, catalysing a series of increasingly disturbing happenings.

Things quickly descend from the utopian to the dystopian as the families realise that all is certainly not as it seems: aging a year every half hour, the children hit puberty, sleep with each other – one gives birth – and the parents age, die and decompose.

The mononchrome artwork adds to the sense of unease, while the text – translated into English by Nora Mahony – drums up the tension with effective, if sometimes rather obvious, visual and narrative devices. There’s the ‘No Lifeguard on Duty’ sign; the sea is ‘unusually calm’; one of the characters asserts ‘it’ like everything’s off kilter here’ early on, but nonetheless, you can’t help but be drawn in.

Sandcastle is published by Self Made Hero on 11 November, priced £14.99