Howat says, ‘The core strategy idea was to express the force of war – it had to look like a forceful identity. This led to the use of the fragmented blocks.’

He adds, ‘There was also a need to simplify the name, moving towards using IWM.’ Howat says this will be used as a prefix at the IWM sites, for example IWM Duxford.

The new marque uses the Interface font family and the angles in the core identity are carried through into other applications, such as die-cut leaflet covers. 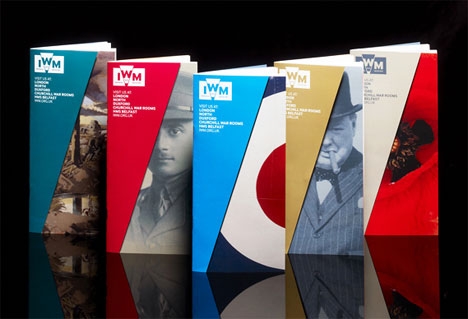 Howat says, ‘The new marque references the old marque, but that was very specific to World War II, it had to become more flexible. We also wanted something that could use the fantastic library of images they have.’

Hat-Trick has worked with the IWM’s in-house team and created a full set of guidelines for roll-out. A new website is being developed by Bureau for Visual Affairs.

Diane Lees, director-general of IWM, says, ‘IWM was established in 1917 to collect and record everybody’s experiences of the Great War, which was still being fought. In many ways the new brand takes us back to this original purpose by focusing on our collections, which are made up of the everyday and the exceptional, drawn from people of all walks of life.’

The new identity is set to roll out from this month, starting with the Don McCullin photography exhibition, which opens on 7 October.

Orchestral Manoeuvres in the Park