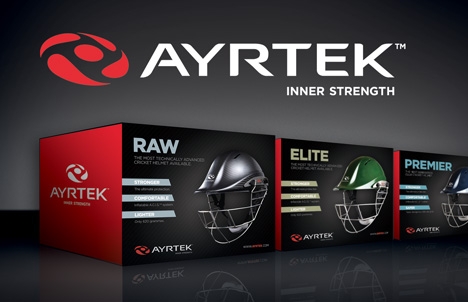 The helmet uses an inflatable liner which can be personalised for each player. Its design also aims to prevent injuries caused by cricket balls penetrating the gap between the peak and the grille of the helmet.

The Ayrtek design was created in 2007 by Tom Milsom and Matt Wells, and the company was acquired last year by a consortium led by entrepreneur Jim Grant.

Mr B and Friends was brought in following a direct appointment in the summer and tasked with creating an identity for Ayrtek as well as packaging and marketing materials for the helmets.

Mr B and Friends managing director Simon Barbato says, ‘The product was being worn by some of the best players in the world, but with a retail price of £249.99 was seen as being too expensive for club players.’

Ayrtek has developed a helmet for the club player priced at £79.99. Barbato says, ‘We needed to create a brand that appealed to not only the pro, but the mass-market club player too.

The consultancy has developed the Inner Strength brand positioning for Ayrtek. Steve Richardson, creative director at Mr B and Friends, says, ‘After studying the other brands in the category it was clear that we needed to position the Ayrtek range at the premium end of the market.’

The consultancy has been appointed to work on marketing materials for Ayrtek for the next year, including a website which is set to go live this week.