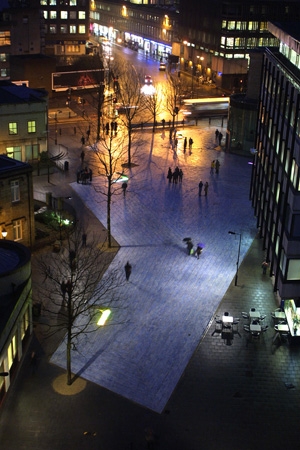 Martin Callanan, MEP for North East England, told regional newspaper the Evening Chronicle that the installation outside the city’s Laing Art Gallery ‘clearly wasn’t well designed or well thought out. It’s now time [for the council] to cut their losses and get rid of it.’

He added, ‘They could put some granite paving stones there instead. It would be cheaper to make, more cost effective and probably look more attractive.’

The piece, installed in 2001, is understood to have suffered from vandalism and theft, and reportedly costs the council £3000-£5000 a year in maintenance costs.

However, Newcastle City Council director of strategic housing Harvey Emms told Design Week there are no plans to scrap the piece and said it is well maintained.

Emms says, ‘There are currently no plans to remove or redesign the artwork and the city council has maintained the Blue Carpet annually since it was installed, undertaking works identified either through quarterly inspections or as a result of reported damage or vandalism.

‘This work predominantly relates to the repair and replacement of the tiles themselves.’

The piece is made of paving slabs composed of a crushed blue glass and resin composite.

Where it abuts buildings the paving skin rises up.  Other interventions include benches which appear to rise out of the paving and beneath them sunken glass topped boxes with coloured lights.

A spokeswoman for Heatherwick Studio says, ‘We are sad to hear that the blue carpet has become damaged. We would like to work with the council to fix this as soon as possible.’

In 2009, the Heatherwick Studio B of the Bang sculpture in Manchester was pulled down following a series of structural problems.

The previous year, Heatherwick Studio and subcontractors Packman Lucas, Flint and Neill Partnership and Westbury Sculptures had paid £1.7 million to Manchester City Council in an out-of-court settlement relating to the installation.

And now for the science bit…