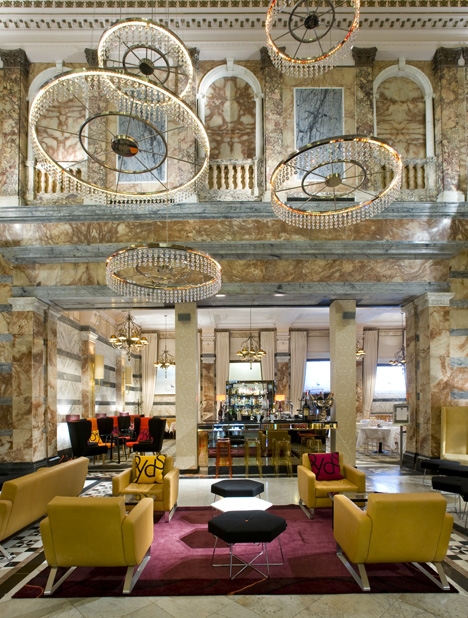 The consultancy was approached directly by client Charles Boyd  who opened the restaurant as Boyd’s Brasserie 18 months ago.

According to founder of Red Bird Design Paul Clarke, ‘It was dull as dish water, but in a beautiful environment. The ergonomics were wrong, the flow was wrong – there was a bar creating a barrier.

‘People even thought the entrance was a hotel waiting room and left bags there. I needed to help him understand what was wrong.’

Clarke has renamed the restaurant Boyd’s Brasserie Bar and Lounge and signage will be made to reflect this.

‘We flipped the bar, made a smaller restaurant by 50 per cent but only lost 10 per cent of seating,’ says Clarke. The black granite champagne bar has been moved to the rear of the room with its antique mirrors and new bar stools have been added.

Art Deco inspired furniture has been brought in across the space including black velvet flock patterned wing chairs with chrome runners, hexagonal black felt stools and kings chairs. Brightly coloured rugs have been placed on the marble floor.

‘It used to be an old gents place but now it can be a chic destination with lots of sparkle to attract young people,’ says Clarke.