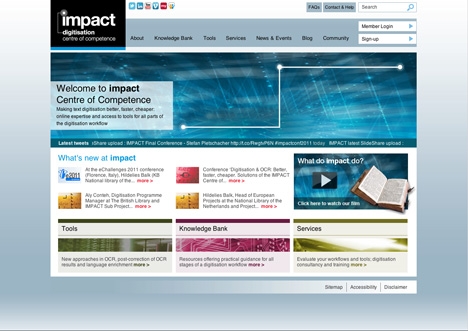 Impact is a joint project between the National Library of the Netherlands and the British Library, funded by the European Commission, which is relaunching with a new website and branding from today.

Sherry was appointed to the project in June, having responded to a tender put out by the National Library of the Netherlands.

Ellie Thompson, graphic designer at Sherry, says, ‘Initially we submitted a proposal just for the website – they had a very specific idea of what they wanted the site to do and how it should look – but when we won the tender we proposed to rebrand it.’

The site’s new incarnation will see it move from ‘celebrating the visual aesthetics of historical texts’, to becoming a ‘community hub and point of reference’ for the digitisation of text, according to Thompson.

‘It’s showing we’re modernising it and making it cleaner’, she says. ‘There was a feeling that before it didn’t really encompass the digital aspects – we wanted a much more dynamic aesthetic, so we used a diverse colour suite to freshen up what thy already had.’

Sherry used a mainly blue colour palette for the site, with the other colours taken from those created when light is refracted from a prisms, referencing the scanners used to digitise the texts. The new lower-case, black and white logo uses the dot of the ‘i’ to represent one of the technologies used in the scanning.

Sherry has created brand guidelines for its application across other touchpoints, though it will initially only be shown online and on Impact T-shirts.

Voxpop – who is the most inspirational public speaker you have seen?