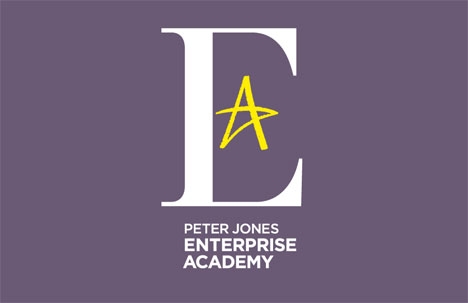 Together worked with Jones, the academy team and academy students to develop the new branding, which is set to roll out across the colleges.

The identity uses a large serif typeface and a hand-drawn star, which the consultancy says serves as both an ‘A’ for academy and an ‘A star’ for achievement.

A colour palette of purple and yellow is employed while hand-drawn motifs are used throughout the marketing materials.

Together says it needed to create an identity that ‘was serious and business-like while at the same time capturing the energy of entrepreneurship and appealing to young people’.

Matt Baxter, creative director at Together, says, ‘After our initial briefing meetings with Peter and his team, it was clear that we needed to create a visual identity which could work on a number of levels: on the one hand communicating the serious “grown-up” world of business and, on the other, conveying the more “sparky”, upredictable, maverick nature of entrepreneurialism.’