If award wins are a measure of creativity then this chart ranks some of the best the UK has to offer in terms of outstanding work in branding and packaging. All have notched up a significant tally of trophies over the past three years.

The Partners, WPP’s brightest design star in terms of awards success, tops the chart – a position it has become accustomed to in creativity listings, with an array of recognised creative leaders falling in behind. Awards stalwarts include the likes of The Chase, Williams Murray Hamm, Turner Duckworth, Johnson Banks, Pearlfisher, Pentagram and Lewis Moberly, but there are newer names too, notably Hat-Trick Design, Purpose, NB Studio and Moving Brands, ranking in the top ten.

Though all have wins across a raft of recognised prize schemes, including the acclaimed D&AD and Design Week awards, it isn’t surprising that the Benchmarks have helped to boost the standing of some of the main contenders over the past 12 months. The awards are, after all, conceived to honour the best in branding design.

If you look at the work behind the rankings, you will notice that no job is too big or too small to win an award

Hat-Trick won Best of Show in last year’s Benchmarks for the branding of the British Heart Foundation’s Small Creature initiative to help children come to terms with bereavement, for example, and a Benchmarks award for the BHF Heart Health campaign last year. Meanwhile, Purpose added to the acclaim bestowed on it by the 2010 Design Week Awards judges for its strong, black-andwhite branding for English Farming and Food Partnerships, which was runner-up for Best of Show in the 2010 Benchmarks.

Significant Benchmark wins for Rose, Pentagram – through the House of Cards project with ad agency Leo Burnett – and Radford Wallis have helped built their standing in this listing too.

If you look at the work behind the rankings, you will notice that no job is too big or too small to win an award. The rebranding of Coca-Cola was a huge awards success for Turner Duckworth, for example, while The Chase won Best of Show in the programmes section of last year’s Benchmarks for Home – a low-budget project for local charity Merseystride. Then there was the House of Cards campaign for homelessness charity Shelter, on which ad agency Leo Burnett worked with Domenic Lippa’s team at Pentagram and which won several awards.

Nor do you have to be London-based or a big, international player. The inclusion of Manchester’s The Chase, Mark Studio and True North and Edinburgh-based Tayburn proves that to be the case.

What is encouraging about the listing presented here is the number of groups ranked in the Top 20 that also do well in the DBA Design Effectiveness Awards rankings. Elmwood, Pearlfisher and Lewis Moberly are among those that figure most years in the effectiveness awards – which are not included in this chart as they aren’t awarded for creativity – proving that great design and sound performance in the marketplace can go hand in hand.

Even so, this ‘creativity’ chart bears little resemblance to the Top 30 branding and packaging groups ranked according to business success. There are two plausible explanations for this: on the one hand, groups like The Partners and Fitch that are owned by global marketing services conglomerates might be able to enter any awards they want – and succeed in them – but the strictures of the Sarbanes-Oxley legislation in the US prevents them from submitting unaudited financial data; and several of the smaller specialist groups – such as The Chase, Hat-Trick Design, Williams Murray Hamm and Turner Duckworth in the top five – choose not to share details of their business performance with us for the Top 100 and other rankings.

By the same token, several groups known for their business prowess opt not to enter awards even though their work often stands up to scrutiny by their peers. It would be great if they could heed the message put out by the likes of The Partners, Elmwood, Pearlfisher and Lewis Moberly – that creativity and business go hand in hand. We hope in future to be able to show greater cohesion between creative work and business success – for consultancies and clients alike. Only by doing so can we portray design as the maturing industrial sector it is. 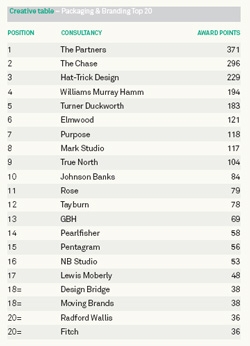 As with Design Week’s annual Creative Survey, the listing published here is based on the success enjoyed by largely UK consultancies and in-house design teams in the main creative awards. In this case, the focus is on awards for excellence in packaging and branding design. These include D&AD, Scottish Design Awards and Starpack, among others. Each award carries points reflecting degrees of success in that scheme. The Top 20 Packaging & Branding chart was compiled from the 2010 Creative Survey, where points have been accrued from award schemes over three years. The chart has been updated with Design Week’s two main award schemes – the Benchmarks 2010 and the Design Week Awards 2011 – relating to branding and packaging design.

Ahead of the pack