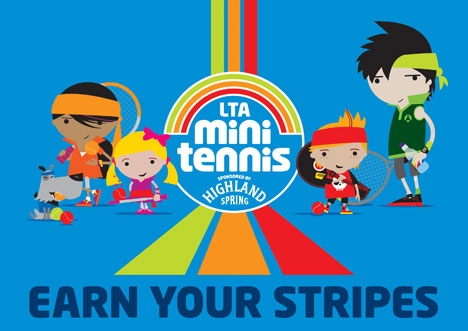 The consultancy was appointed in April this year having been approached by the LTA for the project.

999 used a set of animated characters,  created by illustrator Spencer Wilson, each representing a different age group within the three-to-ten-year-old bracket.

The consultancy was briefed to create a brand to relaunch the scheme that would encourage children to participate in the sport. It used the three Mini Tennis stripes – red, orange, and green – and made them more ‘dynamic’. Blue typography is used to ‘support and enhance’ these three colours.

Aileen Geraghty, managing director of 999 Design, says, ‘The three stripes are a central part of the identity. these are the living, breathing aspects of the game.’

She adds, ‘We wanted to create a brand children would aspire to be involved in – even beyond the game itself.’

The identity will be shown across Mini Tennis badges, Rally Award certificates, posters, literature, merchandise and event material and bespoke packaging for scheme sponsors Highland Spring Water. 999 also created brand guidelines for the application and roll out of the identity.