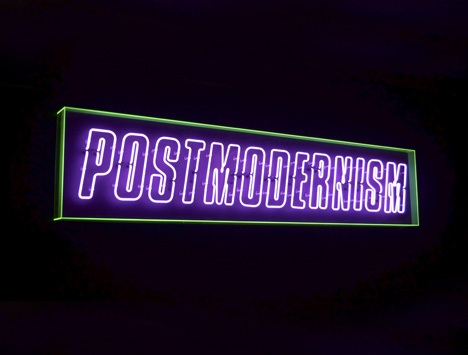 Apfel’s says its graphics draw on Las Vegas neon signs; patterns by Postmodern design and architecture group The Memphis Group; New York billboards and ‘the fluorescent Perspex and flickering neon of the futuristic city in Bladerunner’.

Collaborating with architect Carmody Groarke, which worked on exhibition designs for the show, the consultancy was invited to pitch for the project about a year ago.

The graphics are seen on billboard poster backdrops, neon signage, Memphis Group-inspired rubber bands and fluorescent Perspex lightboxes, and all graphics are closely integrated with each room’s exhibition architecture.

Apfel co-founder Emma Thomas says, ‘The brief was very thorough and we worked very closely with the curators in evolving the design concepts’.

She adds, ‘They were really keen on it being a particularly lively show with the music and graphics, and to focus on all the different disciplines, not just the architecture.’

Glenn Adamson, co-curator of the Postmodernism show, says, ‘Apfel have been able to summon the energy of Postmodern graphics (sometimes trashy, sometimes confrontational, always surprising) without indulging in pastiche.

‘It’s in hundreds of subtle touches that the brilliant graphic designers can help to infuse an exhibition with its unique aesthetic personality.’

The Postmodernism show runs until 15 January 2012.

Someone works on Spurs branding overhaul