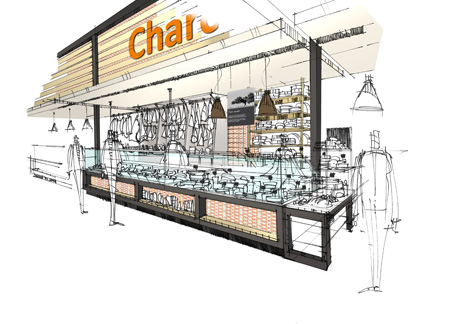 Cada began work on the concepts in September 2010, having been approached to make a paid pitch with approximately six other international consultancies.

It was briefed to create a ‘neighbourhood’ store that retained the brand’s price-conscious approach.

David Callcott, Cada director, says, ‘They sell on price – we had to retain the feeling of a good price point for the masses but also be a neighbourhood market to attract the locals.’

Cada created all branding for the stores, which will initially be piloted in two stores opening this week, and then rolled out to the over 50 or so stores around Portugal. It is hoped the roll-out will be complete within three years.

The consultancy created all branding and interiors including signage, point-of-sale and ticketing.

Callcott says, ‘We wanted to create a market feel, particularly with the fresh produce. We used white tile on wall areas and provenance graphics – particularly for fish and meat – looking at where the product came from and explaining it in graphic terms.’

Each individual department within the store, such as charcuterie, has an individual concept that ties together with other areas through a ‘modular pattern framework’, according to Callcott.