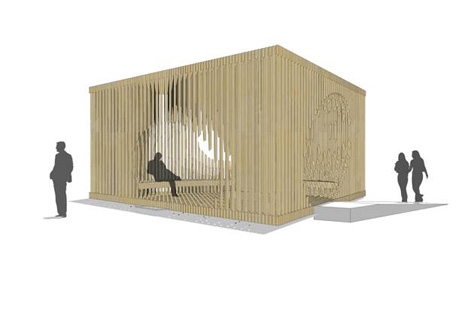 Adjaye, who has been named Designer of the Year for Design Miami 2011, is to create the site-specific Genesis design.

The Genesis pavilion is composed of hundred of vertical wooden planks which morph into interior seating. The triangular structure has an open roof, and aims to create ‘an engaging spatial experience through a transcendent use of materials’, say organisers.

Designer of the Year is awarded by Design Miami to recognise ‘an internationally renowned architect, designer, or studio whose body of work demonstrates unmatched quality, innovation and influence, while expanding the boundaries of design’, according to organisers.

Adjaye, principal architect of Adjaye Associates says, ‘To win an award like this from the design community is really significant because so much of my work is about crossing platforms. Being recognized this year – which culminates in all of the work and research I’ve been doing in Africa – is extremely meaningful.’

Goebl says of Adjaye, ‘The democratic approach to design is clearly a benchmark of what he does, but as you look more deeply, there are so many layers to David’s work. His projects show a real sensitivity to materiality, not just aesthetically, but in a performative and emotive sense.’