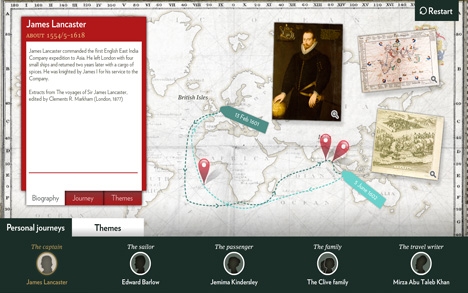 The touchscreen interactive allows visitors to explore trading routes and stories about the East India Company from those on board the ships that sailed from Britain to Asia, using personal stories, diary extracts and visual details of the artefacts.

Tim Smith, GRDD senior designer, says, ‘We wanted the interactive to be true to the content of the gallery, featuring a lot of objects on display, but we had to follow strong brand guidelines.’

GRDD was appointed to the project having previously created an interactive for the Nelson Gallery, and was invited to a four-way creative pitch for the East India and Asia gallery project in November 2010.

Users can select themes that interest them, and can view items from different angles and using different magnifications. Biographies detail the lives of those on board the ships, including captains and passengers on various journeys.

Smith says, ‘It was a challenge to mix the target audiences with the content. It’s aimed at 16-year-olds but it’s also relevant to Key Stage Three, so we had to cater to a younger audience while not patronising an older audience.

‘We asked for feedback in schools and the kids were really interested in piracy, disease and death.’

Voxpop – Which 1970s brand would you like to revitalise?