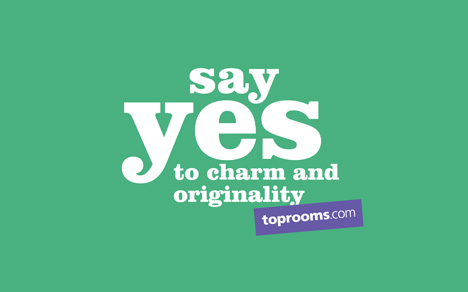 The consultancy has developed the ‘stay original’ strapline, which it says ‘Highlights the fact that Toprooms.com is the antithesis of its more corporate competitors, that often lack character and charm.’

Heavenly was appointed to the work by Toprooms.com brand owner Eviivo following a tender. The consultancy was tasked with carrying out a brand audit, creating a new brand position and developing a new visual and verbal identity for the website.

The consultancy says it has used ‘big, bold, characterful statements’ and ‘a flexible graphic style’.

Paul Franklin, creative director at Heavenly, says, ‘Life’s too short to stay in a boring, grey hotel, so we wanted to create an identity and positioning that reflected that originality, that feeling of quirkiness and individuality.’

Gavin Gray, head of distribution at Eviivo, says the new identity ‘captures the intelligent, quirky and welcoming traits of our brand’.

The new identity launches this week.

Pull up a chair